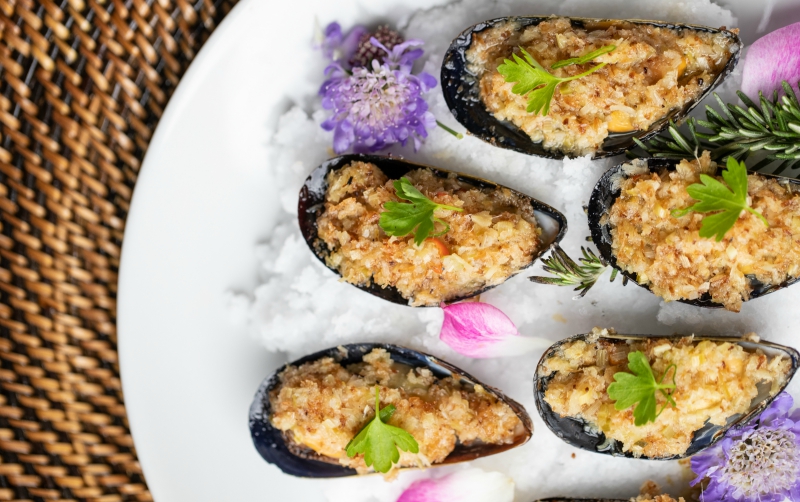 For the past year, Bar Angeles has occupied the space next to Malo on Sunset in Silver Lake, but big changes are in the works inside. The space will soon relaunch as Ma’am Sir, a casual Filipino bar and restaurant with a food program helmed by Rice Bar’s Charles Olalia.

The 34-year-old chef and restauranteur recently partnered with Bar Angeles owners Wade McElroy and Russell Malixi (who also run Cafe Birdie, Horse Thief BBQ, and Good Housekeeping) to launch this new venture. Bar Angeles closed in late March and the team recently began the process of giving the space a quick makeover in anticipation of a June 13 opening.

Rice Bar, Olalia’s acclaimed 275-square-foot rice bowl restaurant in downtown L.A., came together quickly too.  Olalia says that earlier this year he was “hell-bent” on launching a second Rice Bar location, but when McElroy and Malixi approached him in May to become a part of their project, it was kismet.

“It was a very seamless decision for me to bring a full-on Filipino restaurant in this location. Everything just checked out,” Olalia says, noting that the new restaurant space, which comprises roughly 1,800 square feet, has the exact same layout he envisioned for his second Rice Bar outpost.

When Olalia—who grew up in Pampanga, Philippines, a province northeast of Manila—was thinking of a name for this new concept, the first thing that came to mind was “Ma’am Sir.” The phrase is a nod to a common hospitality greeting uttered by folks who work in the restaurant and market scenes in the Philippines.

When the chef dreamt up the menu for Ma’am Sir, he planned dishes that remind him of the food he’d find at the beer gardens and beaches of the Philippines. It’s what he refers to as “pica-pica,” which can be thought of as small bites. Olalia says McElroy and Malixi encouraged him to expand on his ideas and bring some upscale dishes into the mix as well. The result is a 25- to 28-item menu, something that Olalia says was hard for him to pare down because for him, one of the most challenging things about creating an Asian menu is keeping it small.

Olalia has curated a menu that is “very Filipino through and through,” he says. “The food is geared toward the space, the neighborhood, and the culture that we’re trying to represent of the Philippines.”

But he avoids referring to his Ma’am Sir offerings as “traditional” Filipino fare. Olalia explains that calling a particular dish “traditional” is “discarding everybody else’s opinions on what Filipino food really is.” Everyone has had a different experience with Filipino food. Many of his recipes are reminiscent of dishes he grew up eating in his home, and the exact same style can’t be found anywhere else, even in restaurants in the Philippines.

Expect Olalia, who worked in the fine-dining scene under Thomas Keller at the French Laundry and served as the executive chef of Patina, to add his own elegant flare to the food. Take, for instance, a dish where he cleverly reimagines pancit palabok, a Filipino noodle dish that’s smothered in shrimp gravy, as a humble deviled egg. The hardboiled egg is topped with a dollop of egg salad that consists of a complex mixture of shrimp gravy, chicharron, smoked fish, annatto, fish sauce, and calamansi, a sweet and tangy citrus fruit. And within the cavity of the egg, he also folds in what he describes as something that is almost like a “noodle velouté.”

“It puts all those flavors, those punches, all those beautiful notes of the dish into one bite,” Olalia says.

The chef will be making his own pan de sal bread with Red Fife heritage wheat flour in the restaurant’s wood-fired oven, served with grass-fed butter and pandan curd as accompaniments. The usually simple but luscious shrimp-and-pork lumpia eggrolls are punctuated with the additional toppings of luxuriant sea urchin. Finger foods like his lemongrass-adobo fried chicken wings, served with a calamansi schmaltz, will find a place on the table. And the famed house-made longanisa sausages that Olalia serves at Rice Bar will be making an appearance as well, but as a snack rather than a full-on rice bowl.

Olalia says it’s important for him to go back to his roots and use proper techniques, even employing laborious processes he learned in restaurants, to get the culinary results he’s aiming for. When he makes sisig, a Filipino dish traditionally served with different parts of pig’s head, it’s a labor of love. He uses sweetbreads in his version, poaching them in court bouillon before letting them dry to get a creamy texture. The dish is grilled, chopped, sautéed, and then finished in front of the guest.

“A lot of the sisigs that I see here in the States are so imbalanced in texture,” Olalia says. “Most of it is made of pork belly and kind of tastes like grilled pork belly barbecue. But in the Philippines, it’s a play of textures, and there’s [a balance of] creamy, crunchy, sweet, salty, and acidic.”

And what’s drinking food without the drinks? Ma’am Sir’s bar program is headed by Rafa DaCosta, a transplant from San Francisco and Brazil before that. He previously worked at the now-shuttered Aatxe, which was helmed by the Bon Vivants cocktail and hospitality firm.

DaCosta takes his cues from what he learned from the Bon Vivants, making his own syrups, shrubs, and bitters. He’s been working closely with Olalia to create the cocktails menu, and his focus is making refreshing summer beverages and employing Filipino flavors in the forms of pandan syrup, hibiscus-mangosteen syrup, and calamansi juice. There will be cocktails served with rums, Johnny Walker Black, and Lambanóg, a Filipino coconut spirit. He even does a pandan-flavored old-fashioned.

“My goal was to not detract from the food,” DaCosta says. “All the drinks on the cocktail menu pair really well with the food that we’re having.”

One of his creations is a concoction of muddled avocado, mint, and cucumber mixed with vodka. “It comes out almost like a smoothie,” DaCosta says. “The fattiness of the avocado really works well with the food and helps breaks down the acidity of the food.”

Even though the team has been working on an abbreviated timeline, they’ve managed to successfully add touches to the design that reflect Ma’am Sir’s tropical vibes. Green ivy now hangs from the ceiling, and what was once a black back wall is now covered with a whimsical pink, forest green, and teal vine wallpaper. Woven straw mats adorn the walls, and new booths with red and blue tabletops and brown banquettes have been installed. Olalia says it reminds him of a little garden in the Philippines, something he might see back home. He wants it to be a space that’s inviting to all: families, folks on dates, and groups of friends.

“The beauty of [Ma’am Sir] and our success lies in tiptoeing the line between pushing the Filipino culture forward, being true to L.A., and finding our identity in between those two,” Olalia says.