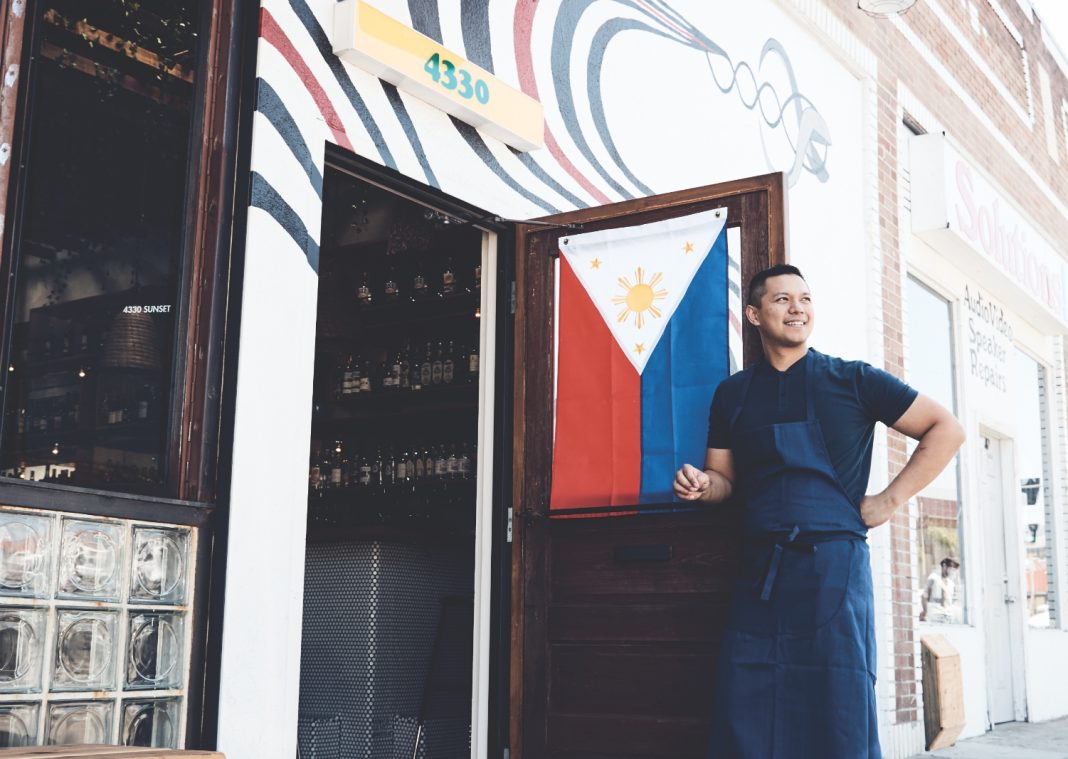 It’s barely 11 a.m. when Charles Olalia pulls a pan of steaming pig snouts from the oven. His Silver Lake restaurant, Ma’am Sir, which in June opened behind the Elliot Smith “Figure 8” wall on Sunset, won’t open for another six hours. But with just one oven available, the chef has been playing kitchen Tetris since early this morning.

“It’s Filipino food, so there’s a lot of braising,” he says, peeling back the aluminum foil to reveal his crispy hash-like pork sisig in the making. Next, he’ll stew the pig’s ears and cheeks and poach the sweetbreads before griddling, chopping, and splashing the whole assortment with cane vinegar. The dish gets sent out to the dining room sizzling on a cast-iron skillet as if it were an order of fajitas at Chili’s. “I remember my cook asking, ‘All this work and we’re selling it for only $16?’ ” says Olalia, laughing.

Raised in Pampanga—considered the culinary capital of the Philippines—Olalia was born into a family of doctors. But unlike his parents and his six siblings, Olalia was more interested in traveling and throwing parties than going to medical school. Cooking seemed to provide ample opportunities for both. At 20 he enrolled in culinary school in Manila not knowing how to dice an onion. After graduating he moved to California and worked his way through some of the most competitive kitchens in the western U.S., from the French Laundry to Guy Savoy. Later he landed at Patina downtown, where he eventually ran the show as executive chef. In 2015 he ditched the foams and ring molds and returned to his roots by opening Rice Bar, a seven-seat lunch counter that dished out heirloom rice bowls. For the first time he was cooking the food he grew up with, but he had only 275 square feet in which to operate, and his ambitions quickly outgrew the restaurant’s minuscule footprint.

At Ma’am Sir, named after a polite greeting used in the Philippines, Olalia is tackling his original dream of throwing an unapologetically Filipino party six nights a week. The menu is stacked with dishes that pair best with a straight-from-the-cooler bottle of San Miguel, so along with sisig there is lumpia, the delightfully crispy Filipino egg roll. Here Olalia replaces the usual wrappers with the delicate North African pastry feuille de brick, stuffing them with shrimp mousse and draping them with plump tufts of uni. Chicken thighs are braised in the wood-fired oven and lacquered with lemongrass adobo, a sauce he learned from Chichi, his family’s cook in Pampanga.

“This is the Philippines,” he says, motioning to the dining room, where sepia portraits of Filipino basketball players hang on the walls and exposed rafters drip with vines of faux ivy. “It’s like Mexico City,” he says of his home country. “Before the world ‘discovered’ it, everyone thought of it as a peasant city, but it’s modern and cosmopolitan. That’s the feeling I wanted to capture.” When Filipino customers come in, he says, you can almost see them exhale a sigh of relief. “It’s like, ‘OK, you guys did it right.’”