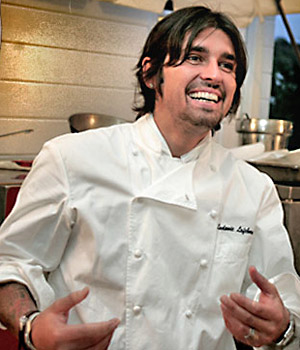 After a year in Las Vegas, at the dubiously named Lavo (“I wash”….?) at the Palazzo, Ludo Lefebvre is coming back to L.A. It’s not that serving 700 plates a night to folks on their way to the disco wasn’t enormously satisfying. “Trust me,” he says. “I learned a lot about organization.” It’s just that his contract was up and he wanted to get back to the beach, surfer that he is, and to cooking a little more spontaneously.

What goes on the menu in Vegas, stays on the menu in Vegas. “I don’t want to use tomatoes in December,” says Lefebvre. He hopes to have LudoBites, “a little bistro where you have good food,” up and running again at the Breadbar on Third Street by mid-May. This is a relief for his wife Krissy, a lawyer, who has been communting to LV on weekends, and moved into a one-bedroom spot in Manhattan Beach so they could rent out their home in the Valley. “I want my husband back,” she says.

In its first incarnation, in the winter of 2007, LudoBites’ menu of small plates rendered critics and the hoi polloi—those who could snag a seat—rhapsodic. The collision of Lefebvre’s classical training and an indefatigable zest for experimentation led to dishes like brocomole (guac without the avocado), miso soup with foie gras, skirt steak marinated in Coke, panna cotta with caviar. The Beverly Hills Cheese shop a partner in the endeavor (as they will be again), provided all manner of lacto-delectables, from the raw milk Epoisse for a cheese plate to the goat cheese Lefebvre made a mousse of and popped atop his beet gazpacho. The prices were right, there was no corkage fee, and reservations were nearly impossible to get. We’ll expect the same this time around —although Krissy says there will be a minimal corkage fee, “maybe $5,” to cover set-up costs. “With the economy, this is a good time for LudoBites,” says Ludo. “I call it bistronomics.”

As you’ll remember, Ludo initially made a name for himself at L’Orangerie (moment of silence) before going wild at Bastide (after Alain Giraud, before Walter Manzke). Between those two stints, he came out with Crave: The Feast of the Five Senses, a cookbook co-written by Martin Booe which some bought for the recipes, others for photos like the one of a shirtless ab-happy Ludo emerging from the surf hoisting a  brace of enormous fish.  In the fall of 2007, he co-opted the nighttime kitchen at Breadbar and began cooking his heart out in a global tapas vein.

During his Vegas year, Ludo says his cooking has changed: “I’m still a technique guy, but more simple. I go to the essence. If you order a snapper, I will put the emphasis on the taste of the snapper, and not put too many flavors on it.” His French accent has not diminished on the road to culinary simplicity, and snapper sounds considerably more exotic, possibly divine, when pronounced snaipuhr.

Rumors that Lefebvre is a contestant in Bravo’s new spinoff, Top Chef Masters—think Top Chef with established top toques and without Tom Colicchio— are unconfirmed. We can only say that a flurry of folks in chef whites being trailed by a TV crew were spotted in a local Whole Foods and Ludo was in the mix. Krissy knows from reality TV; she was one of the Donald’s proto-employees on The Apprentice.

Lefebvre will be back in town in a couple of weeks and revving up for LudoBites, which will run five nights a week, Tuesday through Saturday. He’ll have a kitchen staff of three—down from 25 in LV. “I want my freedom,” he says. “This is going to be a lot of fun.” For all of us.