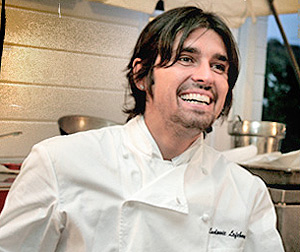 We checked in with Ludo Lefebvre today who, as first reported by Eater LA, is setting up his two-tier kitchen at Lavo, the grand new 20,000 square foot, 300-seater due to open at the Palazzo in Vegas this summer. “When people see what I am doing, they’re going to be in shock,” he says. “Shock.” Particularly if they remember those post-Bastide days when the French chef said he just wanted a tiny little spot with a few tables and a bar where folks would eat whatever he chose to serve. Scratch that. Lefebvre’s hiring 80 chefs for Lavo (his sous, Frank Cervantes, worked with him at a Bastide and has since done a stint with Thomas Keller), and expects to feed a thousand or so Strippers each night. Five hundred for lunch. It’s a small plates enterprise with a Mediterranean theme—Spain, northern Africa, Greece, Italy. “The most exciting thing is to come up with my pizza dough,” he says. A first for the L’Orangerie alum.  He’s got his wife, Kristine (maybe you caught her in Playboy if not on The Apprentice) to thank for the gig. When the folks from the Venetian’s Tao, the moneybags behind Lavo, called, Ludo was slow on the uptake. “At first I said I didn’t have time,” he says. “Krissy forced me onto the plane. Sometimes I am very French.”