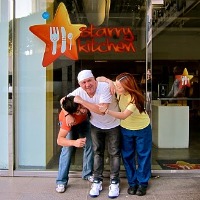 Share
Email
Facebook
Twitter
Pinterest
ReddIt
It seems downtown’s Starry Kitchen has finally found a match made in heaven with chef Laurent Quenioux. The duo has decided that their popular “pop-up” dinner known as LQ @ SK will become a “semi-permanent” fixture at Starry Kitchen, given the popularity of their previous dinners. For those unfamiliar with the back-story, Laurent Quenioux was previously head chef at Bistro LQ, which closed its doors two months. Starry Kitchen owners Nyugen and Thi Tran of Starry Kitchen, spying a chef adrift without a restaurant, invited Quenioux to host a dinner at their restaurant.  The rest, as they say, is history. This summer, LQ @ SK dinners will run every Sunday through Tuesday starting June 5th, with reservations available exclusively online. The bargain-priced $45 prix fixe menu will be at the chef’s discretion, though Quenioux’s signature dish Teriyaki Rabbit Albondigas + Teriyaki Foie Gras has already become a crowd favorite.
[email protected]
350 S Grand Ave
Los Angeles, CA 90071
(213) 617-3474
Reservations available online