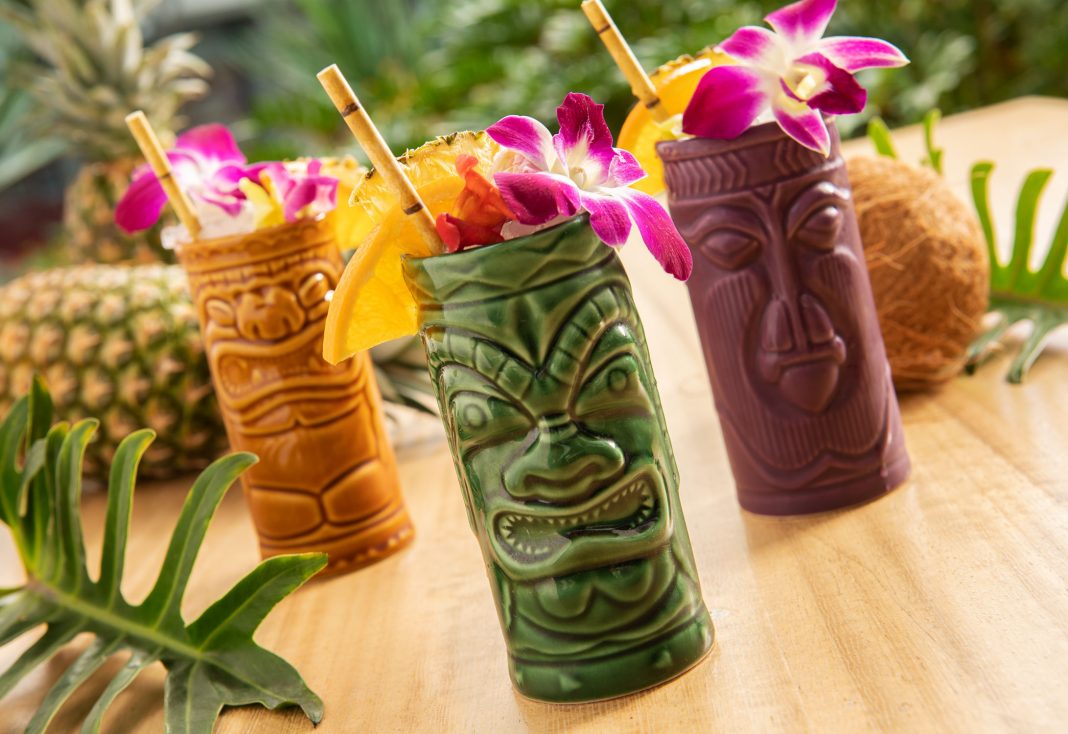 The tropical tiki drink trend is a perennial favorite–but there’s just nothing like sipping a fun, fruity cocktail in the summertime. From permanent tiki bars to limited-edition menus and pop-ups at other places around town, here’s where you’ll find us putting the lime in the coconut and drinking it all up this summer.

The Mixing Room at J.W. Marriott Los Angeles: L.A. Live gets a weekly tropical soiree with the Mixing Room’s new Tiki Thursdays. The bar transforms an outdoor patio into an urban oasis, complete with a menu of craft cocktails and food selections that pair perfectly. Stop in after 5 p.m. on Thursdays from July 11 to September 5. 900 W Olympic Blvd., downtown.

Sonny’s Hideaway: At this long-running tiki weekly, the decor is more along the lines of “general Rat Pack era swanky” but the drinks are totally tropical. Cocktails crafted by the bar team on Tiki Thursdays include the “Amaro Clandestino” with Fernet–a spirit rarely seen in tiki drinks–and the “Oh Boi!” featuring smoked coconut. 5137 York Blvd., Highland Park.

West End Rooftop at the London: “English” and “tiki” don’t instantly go together in our minds, but the charming rooftop bar at the London hotel is trying to change that. They’ve put on a seasonal menu with classic piña coladas, daiquiris, and the like, plus a special nod to their general British bent, the “Churchill Goes Tiki,” which brings together ingredients from around the world. 1020 N. San Vicente Blvd., West Hollywood.

W Hollywood: If your idea of summer fun is that pool party lifestyle, the W Hollywood’s Wet Deck has you covered. This year, the theme is “Twisted Tiki” which includes special-edition cocktails at the pool deck, palm tree shaped drink floaties, and more fun surprises. 6250 Hollywood Blvd., Hollywood.

Pacific Seas at Clifton’s Republic: Make your way through Clifton’s to this hidden, upper-floor bar, and you’ll step into a tiki wonderland. While the bar is relatively new, opening in 2016, “Bamboo Ben” gave the decor a sense of history by integrating vintage pieces salvaged from now-shuttered tiki bars of yesteryear. 648 S. Broadway, downtown.

The Mermaid: Downtown’s the Mermaid isn’t exactly a tiki bar, but it’s certainly tiki-adjacent. They even won “best cocktail” at the annual Tiki Caliente competition in Palm Springs. And for summer, they’re leaning in on that vibe, with an extra tropical-themed menu featuring their own takes on some Polynesian drinks from the past. 428 E. 2nd St., Little Tokyo.

Lono Hollywood: In strong contention for best tiki bar in town, Lono is everything you want in a tiki bar, but a little less kitsch and a little more chic. Drinks here are across the board great, but if you’re looking for something new, try the Scoop Troop Cocktail, made with Humphry Slocombe’s pomegranate piña colada ice cream. 6611 Hollywood Blvd., Hollywood.

Tiki-Ti: One of the all-time legends of the L.A. tiki scene, Tiki-Ti was founded by Ray Buhen, a direct protege of Don the Beachcomber, and has been run by Buhen’s family for three generations. The place is teeny, scruffy, and exactly what you want it to be. Everything is still pretty much as it was in 1961, aside from a recent prohibition on smoking indoors. 4427 Sunset Blvd., Silver Lake.

Tiki No: This NoHo bôite is one of “Bamboo Ben” Bassham’s designs, and has been a Valley favorite since 2005. There’s karaoke, daily happy hour, and so many drinks. Don’t miss their annual Piña Colada Day blow-out on July 10. 4657 Lankershim Blvd., North Hollywood.

Tonga Hut: Operating since 1958, Tonga Hut now holds the distinction of being L.A.’s oldest tiki bar; in addition to the original location, there’s a second one in Palm Springs. The menu is concise by tiki bar standards, with a mix of classic recipes, house creations, and affordable punch bowls. 2808 Victory Blvd., North Hollywood.

Kahuna Tiki: An irony of tiki bars is that for all their island-life aspirations, they’re typically pretty dark, windowless affairs. Kahuna Tiki distinguishes itself by actually offering a large outdoor patio space, so you can take in some fresh air along with your drink. 11026 Magnolia Blvd., North Hollywood.

Purple Orchid Tiki Lounge: Purple Orchid was something of a locals dive for years, but in 2001 got a fresh tiki update and has been tropic-ified ever since. Now it’s a staple on the tiki scene, and even has a small stage where live surf rock bands entertain the crowd. 221 Richmond St., El Segundo.

Bar Tiki Tiki: This speakeasy tiki bar is tucked within Long Beach’s (still operating) Beer Belly gastro pub. It’s only open Thursday to Saturday, but if you catch it one of those evenings, be sure to slip inside. 255 Long Beach Blvd., Long Beach.

RELATED: Some of the Most Obscure Vintage Tiki Drinks Have Finally Been Revealed