Home Food & Drink Does L.A. Have Its Own Signature Pizza Style? 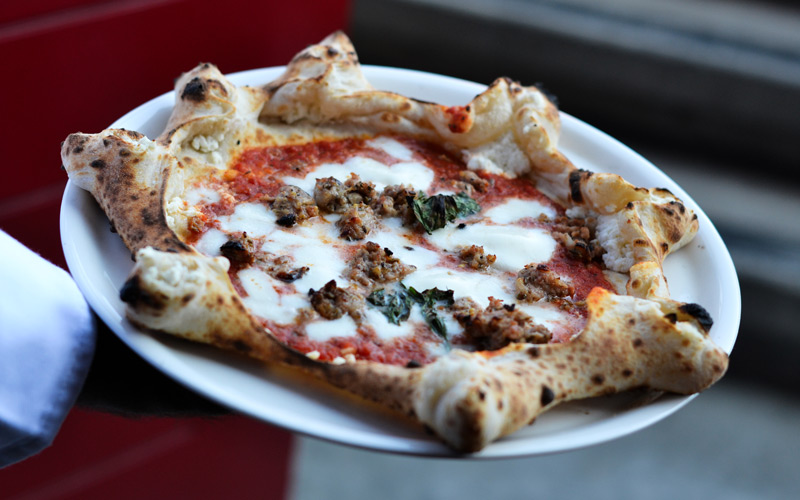 New York has one. Sicily has one. Chicago has one. Cities and regions around the world can point to their own signature style of pizza. Can Los Angeles? We have long been lambasted for our pizza quality, but things have changed. L.A. is teeming with incredible pizza spots that are reshaping the city’s rep. Which raises the question: Are we witnessing the birth of the L.A.-style pizza?

More importantly: do we even want one?

“When I think of pizza in Los Angeles, two chefs come to mind: Wolfgang Puck and Nancy Silverton,” said Felix Trattoria’s pizzaiolo and chef de cuisine, Andrew Naffziger. “Wolf defined pizza in L.A. in the 1980s with his smoked salmon and caviar pizza. Nancy changed the game in the early 2000s with a dough that contains olive oil that gives it a very particular taste and texture.”

New York mayor Bill de Blasio made headlines in 2014 when he was photographed eating pizza with a knife and fork.

#Knicks have lost 82 of 124 games during Bill de Blasio’s term as NYC mayor. I blame him. He eats pizza w/ a fork pic.twitter.com/rEFpjPo7Uf

That’s not the way you eat New York pizza, many cried. The beauty of Los Angeles is its lack of pizza rules. If there is a defining aspect of Los Angeles pizza, it’s that such a controversy could not exist here. This is a city where Wolfgang Puck was free to put smoked salmon on a pizza at Spago, not to the public’s horror, but to its delight.

“In L.A. we aren’t confined by pre-existing associations, so have the freedom to reinterpret and reinvent more traditional styles and make them our own,” said Sprinkles Cupcakes creator Candace Nelson, who just opened Pizzana, a NeoNeapolitan restaurant. “In L.A., a pizza crust can double as a canvas with the pizzaiolo playing artist to create something that is not only delicious, but also beautiful.”

Perhaps one of the best uses of the canvas is to decorate it with our local produce, one of the elements that sets Los Angeles apart from other pizza cities. “The advantage that we have is our weather. It is pretty consistent, so it doesn’t affect the dough that much,” said Jon & Vinny’s Vinny Dotolo. “We have incredible accessibility to fresh produce so that we can use great ingredients to put on top of the pizza, but to also build around for the rest of your menu.”

Lodge Bread Company takes full advantage of utilizing those great ingredients. In the bakery’s early days the team used to only do pizza every Monday night on a first-come, first-served basis. The pie, made with whole grain flour, was always some sort of market-driven beauty, like a combination of Valdivia tomato, sprouting broccoli, aged pecorino, and Calabrian chili. They’d sell out in the first hour, whipping out 75 pizzas from their bread oven. “The pizza night thing really did show us that there was a very high demand for good pizza in L.A.,” said Lodge Bread co-owner Or Amsalam.

When Lodge expanded, it brought in a wood-fire oven and made pizza a permanent fixture on the menu. The farmers-market-to-pizza topping style has stayed the same, but with the new oven came a new pizza dough. Lodge 2.0’s pizza now offers the bounty of SoCal produce atop a blistered Neapolitan crust. Amsalam isn’t calling it L.A.-style. “L.A. is a melting pot of different types of food, different types styles, different types of people. You’re bound to find every type of pizza,” Amsalam said. “I think L.A. is just a bunch of young chefs now starting to do their own thing. It shows there’s no true L.A. style.”

Pizza legend and L.A.-native Nancy Silverton has a similar take. “Los Angeles pizza is like the city of Los Angeles itself, a fascinating mixture of cultures, a blend of highlights those myriads of cuisines have to offer,” Silverton said. “I’ve seen pizza topped with sashimi, carnitas and cubes of lamb that would normally be on a shish. Like L.A., it is not as easily defined as pizza is in Chicago or New York or Rome pizza. In that sense, there really is no L.A. My own pizza is just that. My own.”

Dotolo sees Jon & Vinny’s pizza as a roundish amalgamation of New York, Neapolitan, and Connecticut styles. “At Sotto, we’re trying to emulate Neapolitan style pizza,” said Sotto and Rossoblu’s chef Steve Samson. Unlike the pizza itself, L.A.’s pizza style can’t be put in a box. According to the chefs changing the pizza game, the style is undefinable, and proudly so.

RELATED: 21 Pizzas You Need to Eat in L.A. Before You Die