Home Uncategorized Looking Forward & Looking Back: Food & Drink in 2012 and 2013 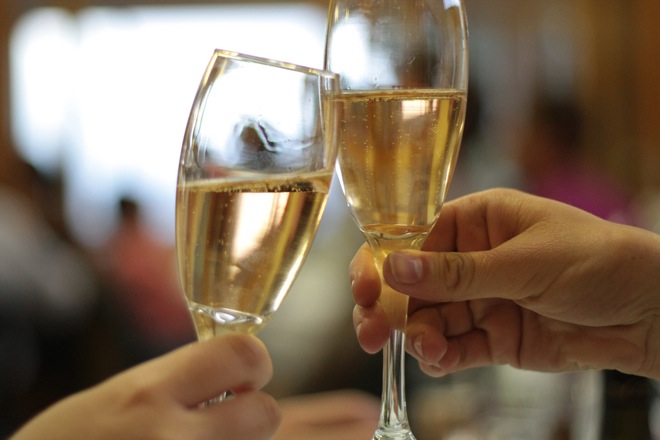 Because it’s New Year’s Day, the ancient holy food blogging scriptures doth decree that we put up some kind of looking forward/looking back post that captures our sentiments of where dining has taken us, and where we might hope to go in this—the thirteenth year of the common era’s second millennium.

2012 was pretty rad, what with us ramping up the coverage on ye olde Digest blog here and adding our awesome team of writers, and I think it’s safe to say we’re all looking forward to this new year. So uh, hey 2013, we just met you, and this is crazy, but we’d love for you to bring it on.

Favorite food/drink moment of 2012?
Witnessing talk show host Madeleine Brand almost spit out on-air the UMAMIcatessen foie gras & jelly donut I gave her. It was a genuine reaction and I found it to be comedy/culinary gold.

Any New Year’s resolutions?
I need to cease and desist telling cute girls that I’m Jeremy Lin‘s brother. I have done it. More than a few times. I need to stop. And eat more kale.

Any predictions—whether they be broad trends or very specific happenings—that you’d like to have on record here and now so you can point back and say “I told you so”?
The Hostess snack cake void is filled by restaurants and pastry shops all over town making thinly veiled knock-offs with names like “Tween-kies” and “Bing Bongs.” Also, tablet computers will be used in more ways than just taking orders in restaurants but will also be able to track your rack of lamb from conception to plating.

What you’re looking forward to most in 2013?
Walter Manzke’s upcoming spot, République. It’s going to be a game changer.

Any New Year’s resolutions?
No resolutions; I’ll just keep up with the same bad habits.

Any predictions—whether they be broad trends or very specific happenings—that you’d like to have on record here and now so you can point back and say “I told you so”?
Well, it seemed like 80% of the restaurant openings last year were Latino concepts. I think this will continue, with Latin—and Asian—cuisines becoming the dominant culinary forces in L.A., and across the U.S.

Toasting The Varnish‘s win for Best American Bar with those of the L.A. cocktail community who were at Tales of the Cocktail in New Orleans after the Spirited awards show. Far away from home, we really felt the love of our community and our city.

What you’re looking forward to most in 2013?
My favorite bartenders opening new bars or flipping bad ones. For instance, can’t wait to see what Lindsay Nader and Brian Butler do with The Brig in Venice.

Any New Year’s resolutions?
To dial back on the drinking. Kidding.

Any predictions—whether they be broad trends or very specific happenings—that you’d like to have on record here and now so you can point back and say “I told you so”?
Craft versions of bad cocktails! OK, it’s not that new, as I’ve already seen the craft version of popular ‘80s drinks on some guest-bartending menus. But I think variations of bad drinks—as opposed to variations of classics—will find a permanent home on several cocktail lists around town.

Another prediction: After pot is legalized, hemp-infused cocktails will be a thing.

Favorite food/drink moment of 2012?
I have a few: At Bäco Mercat, tasting the very first puffy taco served by chef Josef Centeno for my Texan husband’s birthday. Attending a private cocktail class by bartender Matt Biancaniello and scoring half a bottle of his candy cap mushroom-infused bourbon. Gnawing on beef ribs at the Salt Lick BBQ outside of Austin. Having my mind blown by something as simple as a baguette sandwich and a latté at SQIRL/G&B Coffee. Getting sprayed with champagne by Daniel Boulud at Eleven Madison Park’s James Beard Chef Awards after party in New York back in May. (The night before wasn’t so bad, either.)

What you’re looking forward to most in 2013?
Walter Manzke’s efforts at République, Bucato from chef Evan Funke, and the upcoming Ludo/Jon/Vinny restaurant. Oh, and whatever the heck Craig Thornton has under his cap.

Any New Year’s resolutions?
Naw, don’t believe in them.

Any predictions—whether they be broad trends or very specific happenings—that you’d like to have on record here and now so you can point back and say “I told you so”?
The evolution—and hopefully legalization—of L.A.’s salumi culture. The rise of single-focus restaurants (aka those that specialize in one dish). A renaissance for fine dining. A new vermouth obsession. Here’s to a delicious 2013!

Favorite food/drink moment of 2012?
Having my world rocked by the best pad see ew of my life at an unassuming food cart in Portland, OR simply called I Like Thai. Oh, and it was only $5. I was there for four days, and I ate there four times. On the drink side, it was my first sip of Eagle Rock Brewery’s Unity, a “Berliner rye” style of beer they made with prickly pear for LA Beer Week.

What you’re looking forward to most in 2013?
More restaurants highlighting vegetables. It’s no secret that I’m a proud vegan-leaning vegetarian, but the thought that veggie dishes need to be chock full of overly processed fake meat replacements needs to be a thing of the past. Screw “Chik’n” and all the other meat analogs… I love vegetables, and I want to try them in new and inventive ways.

Any New Year’s resolutions?
More running. More charitable giving. Donating blood more regularly. Asking for organic beer/wine/spirits/coffee/tea/etc. even when I know a restaurant or store doesn’t carry any. Demand creates supply and I need to place the same emphasis on organic drinks that I do for organic food.

Any predictions—whether they be broad trends or very specific happenings—that you’d like to have on record here and now so you can point back and say “I told you so”?
Roy Choi’s new autobiography wins a (non-fiction) Pulitzer Prize. The California Homemade Food Act—which allows for the limited sale of “non-potentially hazardous” homemade goodies like jams and cookies—will begin the dawning of a new economy, and reintroduce us to our neighbors. Substance will be sought in place of hype, and the Slow Food / Slow Money schools of thought will continue to attract followers, proving themselves as the only way we can expect to sustain our place in this world.