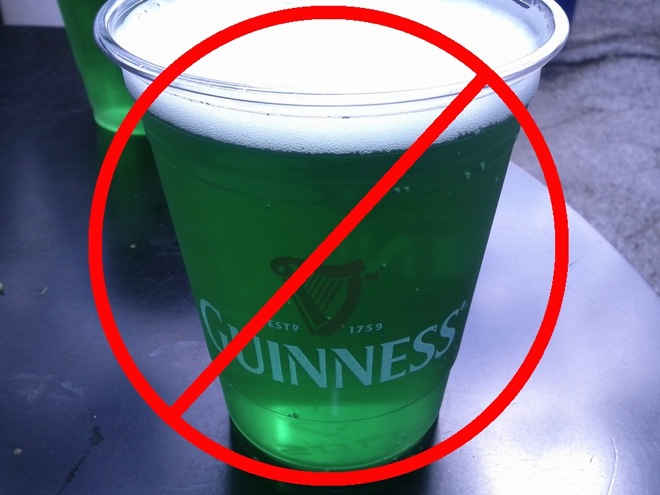 I’m always a little torn about beer-centric holidays like St. Patrick’s Day; on the one hand, it gives me a great reason to go out drinking on what would have been an otherwise lackluster Monday, but on the other hand, there’s a lot of bros and other people doing the same thing…though more as an excuse to drink to excess.

But I’m not here to complain. I’m here to chat about which local craft beers you can drink this St. Paddy’s Day if you’re looking for an alternative to the big brands that are usually consumed.

Green Beer
There is one unfortunate ritual that involves adding green food dye to beer that I can’t seem to get behind, but if you’re partial to the idea of it—or if you forgot to wear green and you need a colorful accessory to protect you from pesky pinchers—head to Angel City Brewery (downtown) and/or Golden Road Brewing (Atwater Village). Each brewery will be serving their lip-puckering Berliner Weisse-style beers with a pump of delightfully green woodruff syrup, a very traditional addition in Germany.

Guinness / Murphy’s
Used to cracking a Guinness in honor of ol’ St. Patrick? Try Eagle Rock Brewery’s Solidarity, a black mild ale that, despite its dark appearance, is fairly light bodied. The darker malts used to brew it provide big toasty flavors and notes of coffee, dark chocolate, and smoke, all while keeping a very sessionable 3.8% alcohol.

Eagle Rock Solidarity Black Mild is available in 22-ounce bottles at many local retailers and better craft beer bottle shops around town; also available on tap at many local beer bars. (Bonus points if you can find a keg charged with nitrogen gas rather than CO2; the nitrogen bubbles are smaller and finer than carbon dioxide, resulting in a creamier head and silkier mouthfeel… like Guinness.) And if you start to feel guilty that you’re not buying an Irish beer for this Irish holiday, take solace knowing that Eagle Rock Brewery’s three resident gingers—co-owner Jeremy Raub and brewers/brothers Andrew & Lee Bakofsky—are all part-Irish. Sláinte!

If the Guinness Extra Stout or Murphy’s Irish Stout is more your style, keep your eyes peeled for Bulldog Irish Stout from Beachwood BBQ & Brewing, now on tap (with nitrogen gas) at the Long Beach brewery and at select beer bars around town.

(Growler fills are available for both beers at their respective breweries. Plus, there are no gross fish parts! Guinness is partly filtered using isinglass, a clarifying agent made from the air-bladder of sturgeons and other freshwater fish; Solidarity and Bulldog are not.)

Smithwick’s / Killian’s / O’Hara’s / Beamish
Irish red ales, usually amber with a reddish copper hue, tend to be malt-focused with a slight roasty bitterness at the end, making them quite easy to drink. While it’s not the most popular of beer styles, there are a few California craft breweries making their own. Keep an eye out for Riley’s Irish Red from Packinghouse Brewing Co. (Riverside), Danny’s Irish-Style Red Ale from Moylan’s Brewery (Novato), McIlhenney’s Irish Red from Alpine Beer Company (Alpine), or TAPS Irish Red from TAPS Fish House & Brewery (Brea). (All are available on draught, and Danny’s Irish-Style Red Ale is also in bottles.)

(The first three are draught-only beers; Anchor California Lager is available on tap and in bottles, and Hangar 24’s Helles Lager can be found on tap and in cans.)

Cider
If you were going to reach for a Magners Irish Cider this year but wanted to support a California cidery instead, there’s a nice little selection of ciders from Julian Hard Cider, located in—you guessed it—Julian. Their “Harvest Apple” is an easy-drinking cider, pale and light in color and body, with a nice, semi-dry finish; it can occasionally be found on tap, but it’s more commonly found in bottles.