Home Uncategorized Liquid Chicken & Waffles: The Flavor Syrup of Your Dreams (or Your... 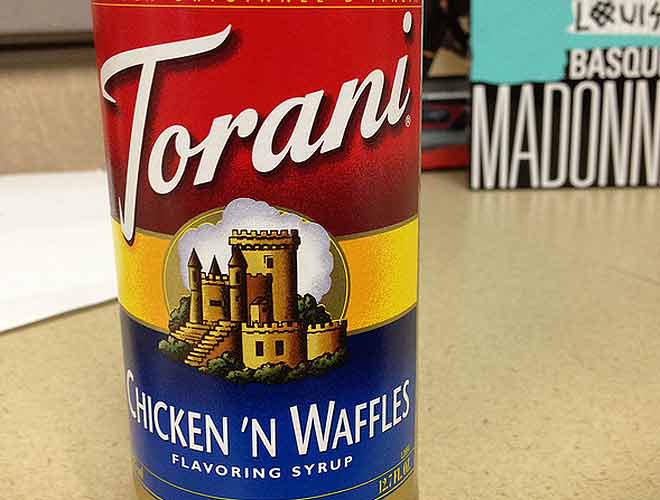 What happens when you’ve gone as far as you can with bacon? You get crazy with chicken and waffles. Torani, a company that produces syrups—mostly in benign flavors like hazelnut, strawberry, and peppermint—is now making Chicken ‘N Waffles syrup. It started as an April Fool’s joke, but it’s real.

The syrup is only available on the company’s website for an unspecified but limited period of time and sells for $6.95 for a 12.7 ounce bottle. Here at theLos Angeles magazine nerve center, we were lucky enough to get our hands on a bottle (read: it arrived for free in the mail).

TASTE: Reactions varied. “Not that bad.” “Oh, my god. Disgusting!” “Not nearly as awful as I expected.” We tried this a few different ways. A tiny dab on the tongue tastes pretty good. A thimble-full tastes putrid. In coffee, we found the first few sips to be tasty, but after that it was stomach-churning.

TAKEAWAY: If you pour Torani’s Chicken ‘N Waffles syrup over actual chicken and waffles, will the universe collapse in on itself? No, but your tastebuds might.