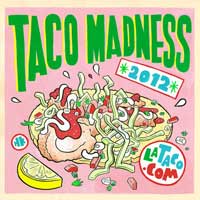 Yes, yes, basketball—but where are the tacos?! They’re friggin’ everywhere, and it’s your job to pick the best in L.A. Taco’s fourth-annual Taco Madness tournament, which opens for first-round voting today. Like your precious NCAA, the city’s top taco-slinging competitors are matched up, the winner of which moves on to the next round. This year, Mariscos Jalisco is going against Rambo’s Tacos, Tacos Ariza against Taco Zone (blasphemy!), and Kogi against Tito’s. Go online now to cast your vote and keep checking back.

And on March 27, head to Guelaguetza on Olympic for an L.A. Taco party featuring all-you-can eat tacos (for $15) made by the host restaurant as well as the new brick-and-mortar version of Mexicali Tacos and Co. The fiesta is in partnership with Echo Park Records and will feature live art by The $tatus Faction, dancing, DJs, horchata, and mescal cocktails (not included in your $15).