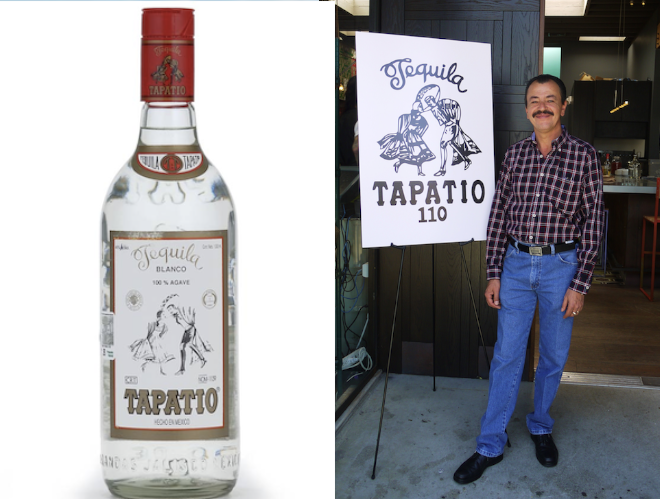 Last week was huge in the spirit world—no I’m not talking Billy the Kid and his regulators high on peyote in Young Guns—I’m talking tequila. One of the Mexico’s treasures, master distiller Carlos Camarena came to town to promote a new product: Tapatio Blanco 110 proof tequila, and meet with bartenders, and top bars all over the city.

Camarena is responsible for one of the greatest tequila brands ever, El Tesoro de Don Felipe, at his distillery, La Altena, in Arandas, Jalisco. The Camarena family has been making tequila since the 1800s. The still-young-at-heart Sr. Camarena turned the tequila world on its head a while back when he crafted the first single-estate tequila for the Tequila Ocho label.

That really would be enough, but then there’s Tapatio, now imported by Napa Valley-based Charbay Distillery and Winery, and represented by Congenial Spirits. Tapatio is one of the most traditional tequilas in Mexico, and the star of NOM 1139, Camarena’s distillery. It’s a big deal at a time when many of the old houses are selling to foreign companies. Top L.A. bartender, Pablo Moix weighed in, “[Camarena]is still putting up good work, where other producers are just not working at his same level.”

Currently, the entire line of Tapatio is available in the U.S. including the new 110 proof tequila blanco, which is the purest product yet to pour to pour into a caballito, or shot glass. The enhanced agave and spice set it far apart from the competition. Camarena never adds anything (the regulatory board allows up to 2% additives in 100% agave tequila), and never changes anything in the production process. His is a product that honors tradition.

Bartenders were starstruck by the humble gentleman from the highlands of Jalisco, which indicates a 180 degree turn for tequila. Bartenders are now pushing a traditional Mexican brand rather than the rushed-to-U.S.-market, foreign-owned startups that were the norm a few years back. To that I say, “Hey bartender—salud!”

Tapatio blanco 110 is now available at liqour stores and bars all over Los Angeles.