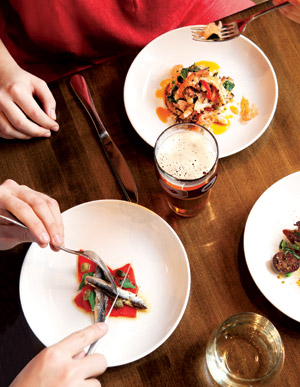 The last time I ate Josef Centeno’s cooking, he was toiling away at a cubbyhole in Echo Park called Lot 1 Cafe. The galley kitchen was so tiny, there was barely room for Centeno’s sous-chef, and though the food was perfectly executed, too few people ventured in to try it. An order would be clamped to the motionless counter wheel; it would be dispatched with a flurry of movements, and then the place would return to a dead calm, Centeno peering toward the door in the hope of new arrivals.

Those days are gone. Lacking a street sign (it’s in the works, I’m told) and stashed along a quiet sidewalk in Little Tokyo, the Lazy Ox has been packed since it opened in December. Past the heavy front door waiters whisk Belgian ales and lengua ravioli to a downtown crowd. Centeno can be glimpsed chugging away in the open kitchen that occupies the corner of the compact interior, intensely focused as he pivots between stove and brick oven. The restaurant is the result of Centeno’s partnership with Michael Cardenas, a former general manager at Matsuhisa who left to start IDG, the company that launched Sushi Roku, Katana, and Boa in Los Angeles before taking them to Las Vegas and Scottsdale. Despite his success, Cardenas is no distant money guy. I’ve seen him almost every time I’ve gone to the Lazy Ox, tending tables anonymously, a busboy apron over his jeans.

Together they’ve come up with a dining hall—they use the term “canteen”—that feels completely of the moment. A wooden yoke, a wall sculpture of a reclining ox, singed-wood paneling—the atmospherics are as spare as those of the Japanese watering holes on nearby 1st Street. This is gastronomy but with a wonderful low-key aspect. There’s no preciousness about the sourcing of the ingredients (a waiter sells for one of the farms that supplies much of the produce). Even the exposed cutting boards and copper pans appear unself-conscious. The work area is less a performance space than a revving engine. Centeno’s food has an “ethnic” tinge yet can’t be pegged to a particular country. The 34-year-old Texan describes himself as German-Irish-Mexican-Spanish, and his cooking is just as peripatetic. The offerings—small or somewhat-small plates mostly—hop from Moroccan-style beef jerky to pasilla soup to braised paleron, filling a single-page menu as well as a cluttered pair of blackboards that seem like the record of research kept by a hungry mind.

Before Lot 1 Centeno worked on the bottom floor of the Wiltern at Opus, the front doors often buried behind droves of concertgoers. There were stints at La Côte Basque and Les Celebrités in Manhattan, Manresa in Northern California, Aubergine in Newport Beach. What sets his food apart at the Lazy Ox is its lack of ornamentation, its muscularity. I’d describe Centeno as a chef of indelicate presentations if that didn’t sound pejorative. I like that he distrusts artifice and that he considers a scattering of pomegranate seeds or a pinch of citrus zest enough of an accent. I certainly prefer that transparency to the tired, robotic flourish of using squeeze bottles to decorate plates. But though his cooking often looks like it’s been just spooned from the pan or scooped from a bowl, there is nothing sloppy about it. The naturalness of the preparations masks an internal precision that seems perpetually oriented toward maximizing flavors. In his version of chicken livers—a mound surrounded by charred bread—the lobes are seared, deglazed with brandy, and hand chopped and jolted with whole-grain mustard and sherry vinegar to potent effect. Technically, this is a chicken liver mousse but one whose airiness is incidental; bold flavor is the driving force.

Given Centeno’s penchant for burly overtones, his frying technique has a surprising delicateness: He splices the lightness of Japanese tempura with the Mediterranean approach, in which the hot oil provides a pronounced flavor of its own. For the boquerones, those cured Spanish anchovies that are on so many menus, the lace batter (he got the recipe from a cook who had studied under the late, great Jean-Louis Palladin) forms a piping-hot sheath that softens the bite of the cured fish. With the brandade, the baking soda in the batter adds a pleasing effervescence to the cod’s salty power. Quail, fried in a buttermilk batter, is catapulted into some fabulous middle ground between comfort and sophistication by the finishing touch of quince mostarda, an Italian off-sweet fruit preserve that Centeno makes in-house.

The dish embodies the chef’s knack for subtle contrasts. That kick created by combining fire, acidity, and spice is Centeno’s musical key. In the charred octopus appetizer, the interplay between the bitter greens and the smoked paprika-dusted pan juices is as vital as the grill-scored tentacles resting on top. With the butterflied pompano, Centeno crisps the fish with a quick fry, balancing its lushness with the acidity of plump orange slices and the round heat of chile-infused aioli.

If contrast is his primary mode, meat is his muse. Many of the 30 or so dishes available on a given night revolve around not just steak and roasted haunches but the cheaper extremities. Tongues, trotters, shoulders, cheeks, ears, necks—at times the menu reads like the syllabus of a course in veterinary anatomy. For a chef interested in big flavors, flesh is the mother lode. But Centeno treats the plethora of cuts pretty much the same way each time: He braises them, then adds other flavors intended to perk things up. The repetition muddies both the menu and the dishes themselves. Those slivers of kumquat have their work cut out for them if they’re going to be a counterpoint to a honking chunk of pot roast that’s been seared and then stewed, and the cold potato salad that accompanies the braised veal breast, a French classic, seems mired in the deli case.

When Centeno tries his hand at another classic preparation, au gratin, things get worse. After all those years grinding away under French chefs, he no doubt understands that the technique demands placing the sauced food under a broiler’s searing flame so it takes on a golden glow. I don’t know if they have the right equipment, but the Lazy Ox’s kitchen is too hectic to allow the chef the time he needs. His cauliflower gratin is mush, and while he presents his scallop special in a shell, the savory sabayon it is bathed in becomes curdled, not browned.

Centeno has no need for tricks, for showing he’s conversant with styles not his own, whether they’re new-school tail-to-snout eating or old-line classicism. Both feel forced. His is a cooking of grounded expressiveness, and he’s much more successful when he comes at the traditional repertoire obliquely, investing it with the bluntness that defines his style. He drapes his brick-roasted half duck, its skin rendered to a crisp by being pressed against a griddle, in a sauce thick with bitter orange julienne and date morsels, reformulating duck à l’orange with characteristic intensity.

One of the challenges of serving small plates is that as a chef, you’re tempted—or required, even—to present a menu that covers a lot of ground. Given the popularity of the Lazy Ox, however, I wonder whether Centeno has found himself hemmed in by the tiny corner kitchen he operates: The man’s got to produce five, maybe ten plates per two-top table (just because they’re small plates doesn’t mean they require any less labor). In fact, the guy doesn’t even have a pastry chef; he makes the desserts himself, demonstrating an impressive technical dexterity. The orange flan is crowned with brandy cream and a hazelnut cookie. Rice pudding arrives in a bowl with caramel drizzled over clouds of whipped cream, and tapioca brûlée blends the comforts of childhood favorites with a dash of pineapple-Szechuan jam. All are original while imparting a sense of being completely familiar.

Frankly I’m surprised Centeno can keep up. Then again, this is his long-dreamed-of restaurant. He’s been fine-tuning the business plan for years, and it only became a reality when Cardenas came along with his deep pockets. Watching Centeno’s partner in his apron helping customers, it’s apparent Cardenas is intent on seeing that his latest project succeeds. I half suspect the man is subsidizing the wine list. It holds some plummy delights, such as a $24 bottle of South African shiraz, and the prices—$6 for tumblers of Argentine chardonnay and Spanish tempranillo—are fair throughout.

On my last visit, however, the beer was what caught my interest. I ate at the bar, where the fellow behind it was chatting with a diner about Trappist ales. Bowie blared over the sound system. My duck was a wonderful confabulation of farmhouse and finesse. The tang of the North Coast Scrimshaw pilsner that the barkeep had suggested brought all the flavors into full color. I glanced at Centeno propped against the kitchen counter. As his longtime sous-chef, Mario Orellana, put out the last orders, Centeno, pad in hand, was doing the nightly inventory. I don’t want to read too much into the snapshot, but he looked content, like a chef who’d finally found where he belonged.