Home Dining Chefs and Restaurateurs For the First Time in 80 Years, Servers at Lawry’s Have a... 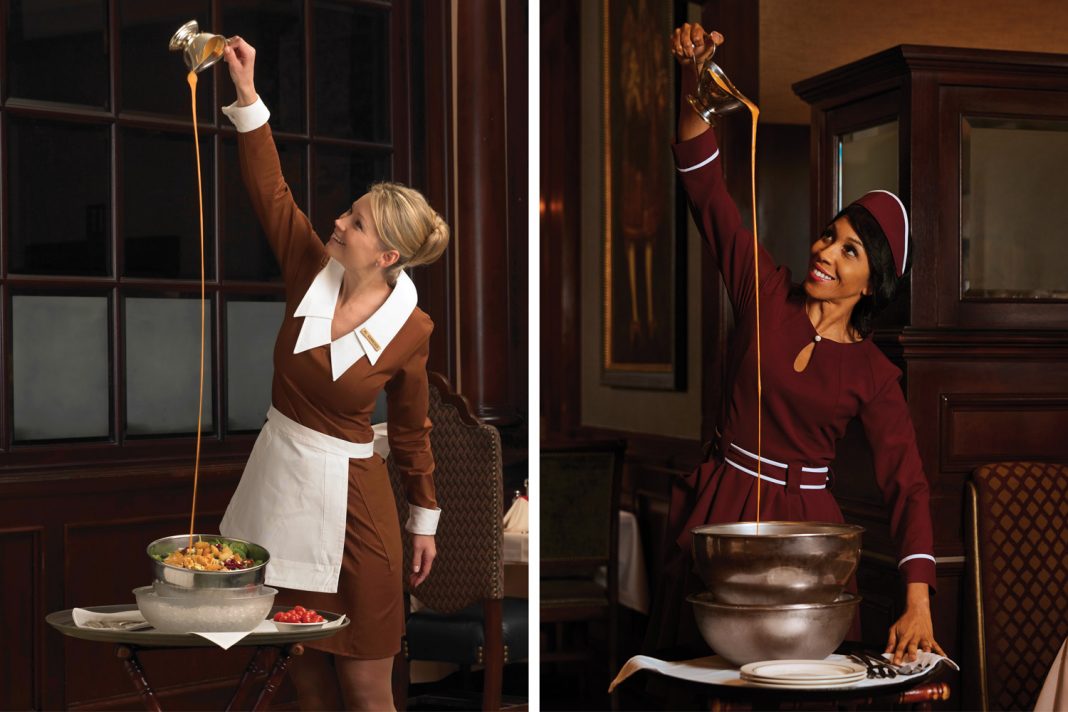 When Danielle Morris started working at Lawry’s the Prime Rib in Beverly Hills five years ago, she asked if she should wear her uniform to and from the job, as Morris had done for previous restaurant gigs. The man training her, who’d been there for decades, suggested she just change when she arrived at work, in case she got stopped by strangers. “He said, ‘If you walked down the street right now, everybody would know what it is, and everyone would probably clap,’ ” she says.

Since the prime-rib institution first opened in 1938, the servers’ unique dresses—dark-rust-colored frocks with a starchy white apron, collar, and cuffs—have been an essential part of the unique dining experience. But in 2014, when the family behind Lawry’s decided to embark on a years-long mission to modernize the restaurant chain, they knew the uniform, which is affectionately called “the brown gown,” needed an update. It “was very polarizing” with focus groups and customers, says Ryan Wilson, the company’s chief strategy officer and the great-grandson of Lawry’s cofounder Lawrence Frank. “We needed to do something.” But he didn’t want to do away with an iconic outfit for servers altogether. “There were some people in the process that said, ‘Oh, just get rid of the uniform and go to pants and a white shirt like every other steakhouse,’” says Wilson, but “that’s not us.”

So the company hired Kit Scarbo, a designer who appeared on TV’s Project Runway in 2007, and posed a challenge for her: update the original dress but stay true to its vintage spirit.

“I kept waiting for Tim Gunn to show up every time I was in the restaurant,” jokes Scarbo, who has designed costumes for films and musicians such as Avril Lavigne and the Smashing Pumpkins.

The new look, which debuted in mid-June, is just one of a number of changes at Lawry’s. Several slightly lighter, vaguely trendy menu items—including a cauliflower steak, a roasted Jidori chicken, amaro liqueurs—have been added alongside the classic hearty prime-rib and buttery mashed potatoes. The decor of the restaurant has also received a big refresh. The color scheme is now dominated by sophisticated metallics, the lighting has been dimmed, and a pastoral mural in the main dining room has been swapped out for an abstract sculpture.

With the uniform, Scarbo wanted it to feel like something a midcentury dinner party hostess—not a colonial maid—might wear. She ditched the original’s wide white cuffs for sleeves with white trim that alludes to the predecessor outfit. The old V-neckline with its wide collar has been streamlined to a flattering keyhole with a single dainty button, and the silhouette is more hourglass than A-line. “It really feels like a dress that you would just wear,” says Tiffany Coty, a server who has worked at Lawry’s for the past 14 years.

Another key difference is the fabric. The original was made from a stiff cotton broadcloth that had little give. It made it difficult to dart around hulking prime-rib carts and to serve the signature “spinning salad”—a menu item that requires a waitress to pour a steady stream of dressing from overhead into a bowl of vegetables and sourdough croutons that she spins on a bed of ice.

“It blew my mind … how active these servers are,” says Scarbo. She researched fabrics and settled on a high-tech Japanese micro-knit polyester with a bit of stretch and a rich brown color that works well with the restaurant’s new lighting scheme.

Coty and Morris like the updated uniform and enjoy no longer being likened to Red Cross nurses, Mickey Mouse, or pilgrims, but they believe it’s only a matter of time before people draw other comparisons to Scarbo’s design. “Give it a while,” Coty says. “They’ll come up with some new ones.”

RELATED: For the First Time in 30 Years, Changes Are Coming to This Iconic L.A. Restaurant