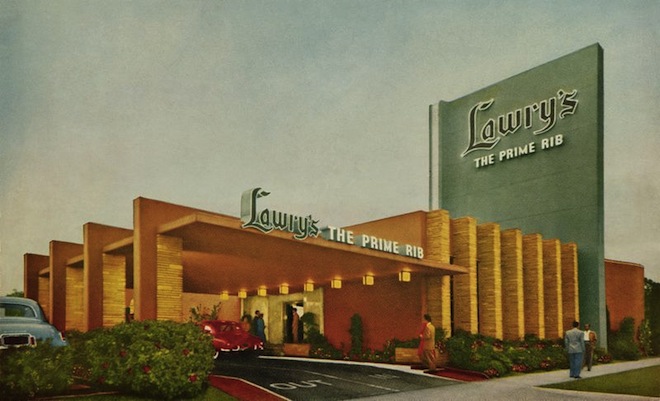 Lawry’s the Prime Rib, an establishment that has lived on La Cienega in Beverly Hills since 1938, is this year celebrating its 75th Anniversary. And its celebrating in a big way: the first 1,000 guests to dine at Lawry’s on June 11 from 11 a.m. until 3 p.m. receive a Lawry’s Cut prime rib dinner—including Spinning Bowl Salad, mashed potatoes, and Yorkshire pudding—for the original price, $1.25. That’s $40.75 less than the meal’s current menu price ($42).

This, of course, got me thinking. If only In-n-Out had rolled back prices in honor of its 60th Anniversary in 2008. Their prices are reasonable, but paying 30¢ for a cheeseburger would be kind of fun.

I’d probably have a pancake problem if I could eat the pancakes at Du-Par’s for their original 1938 price of 48¢ a plate, including melted butter and maple syrup.

But my favorite fantasy is the idea of paying just 10¢ for an ice cold gin martini at Musso and Frank’s, which was established in 1919.