Home Uncategorized Last Night: What You Missed at Cochon 555 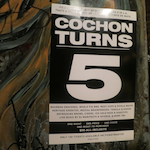 Last night, hundreds packed into West Hollywood’s House of Blues for a pork fest known as Cochon 555. For its 50th event, chefs Jet Tila (The Charleston), Sean Dent (House of Blues), Gavin Lansdale (Ford’s Filling Station), Ray Garcia (FIG), and Joshua Whigham (The Bazaar) created dishes from five different breeds of heritage pig. Wineries paired each dish with wine and bartenders offered bourbon and mezcal pairings for each course. The evening included a bartender Punch Bowl Challenge as well as a demonstration from hot butcherettes Amelia Posada and Erika Nakamura from Lindy & Grundy. Besides the food and drink, here’s what you missed:

1. Bar director/cocktail consultant (and Punch Bowl winner) Josh Goldman’s beard, which has reached garden gnome-length, “We’re up for a Beard award,” he explained, “so I grew a beard.”

2. Jet Tila’s Khao Soi, or Thai Trotter Curry Ramen. “This is one of the dishes I served to the judges; shhh, it’s a secret sixth dish.” (Chefs were only required to make five dishes each.)

3. We actually overheard a gal say aloud to a chef, “Oh, I don’t eat that, I’m a vegetarian,” and it immediately made us want to escort her out of the venue. Instead, we should have directed her to the Kerrygold butter and cheese table. Though this was obvious product placement, we have to admit that we went back for thirds of the Kerrygold blue cheese.

4. “My belly is full of pork and regret,” Jeff Miller, editor of Thrillist L.A. and Black Crystal Wolf Kids frontman, after tasting all of the dishes.

5. The sound FIG chef Ray Garcia made when he won, which was appropriate given the chef’s apparel: he was dressed as a Mexican wrestler, inclusive of face mask and superhero-like silver tights.

The Best Bite from Every Chef at Cochon 555, L.A.’s Epic Heritage Pig Cook-Off