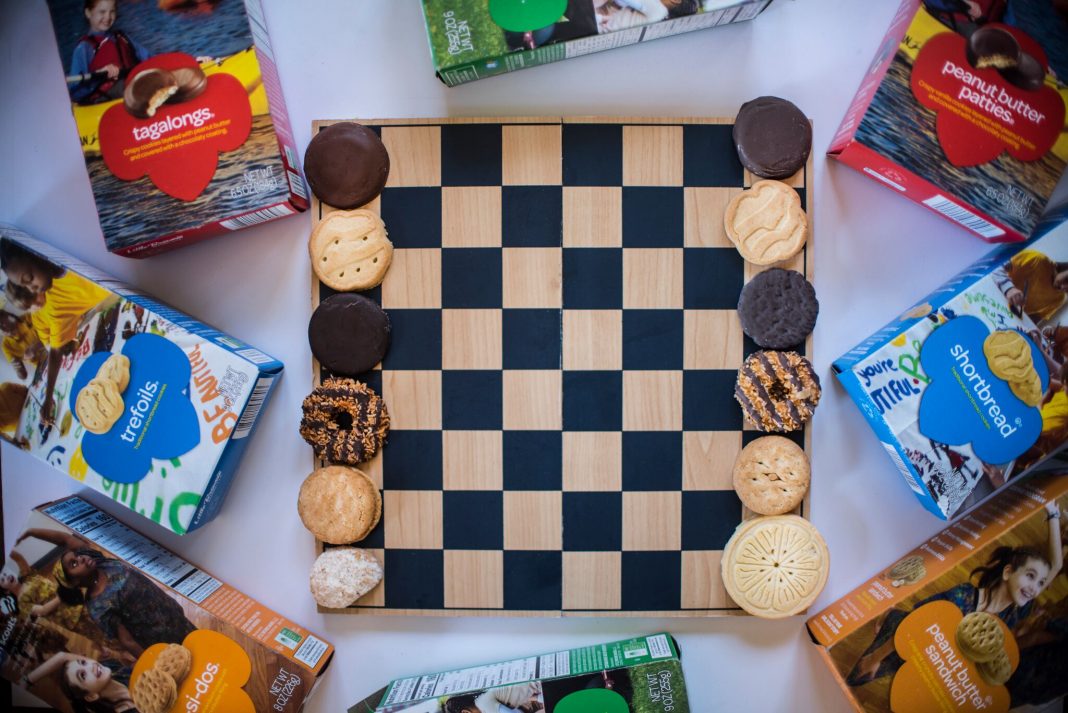 Whenever you buy a box of Girl Scout cookies, you expect the nostalgic sweets within to be the same ones you remember from childhood, right? Not necessarily so. It turns out there are two different bakeries locked in competition for that coveted Girl Scout cash, and different regional chapters of the Girl Scouts contract with either ABC Bakers or Little Brownie Bakers.

In most cases, it’s state-by-state, winner-take-all, but a few states allow for split electoral votes bakeries. California is a split-bakery state. Geographically, most of the state gets cookies from ABC Bakers, but upper NorCal and the dense population centers of L.A., San Diego, and San Francisco all swing Little Brownie. As a result, crossing the county line into Orange County puts you in ABC country.

And it’s not just that different factories are producing the same mass-produced cookies. Oh, no. Each bakery uses their own proprietary recipes, names, packaging design—and in some cases, they go and make totally different cookies altogether. And here we were, thinking a Thin Mint was just a Thin Mint.

We sent a scout south to smuggle some O.C. cookies to our office for a taste-test. A not-blind, not-scientific, highly-subjective taste test.

Thin Mints by ABC are thinner, crispy, and have holes punched in the top; Thin Mints by Little Brownie are a bit thicker and have a smooth chocolate layer. The minty flavor is stronger with ABC; the chocolatey flavor is stronger with LBB. Each seems to have its place and no strong consensus was reached, but when the votes were tallied up, we ultimately tipped toward the O.C. version, but would happily still take a box of L.A. Thin Mints if you want to drop one off.

Here we have two radically different approaches to making a shelf-stable cookie inspired by the fireside snack of marshmallow, graham cracker, and chocolate. The Little Brownie cookie received tasting notes including “vile” and “a broke-ass E.L. Fudge Keebler sandwich bullshit.” (N.B. LBB is in fact owned by the same company as Keebler.) Some reviewers liked the sandwich version, probably because they ate them as children, or as one noted “this was the last cookie I ate and my tastebuds were probably shot.” The ABC version is a square of chocolate-covered graham cracker which tastes convincingly enough like graham cracker.

Our tasters were divided on this chocolate-covered, peanut-butter-filled option. Little Brownie makes their cookie with a divot reservoir in the middle, creating a single, deep crater of peanut butter, whereas ABC spreads a thinner, uniform layer all the way across. How you feel about that texture completely determines which cookie you like. Ultimately, the center well of PB, described as “prob a psychological trick” designed to fool one into thinking there is more peanut butter there, took the prize.

These are the other, less popular peanut butter Girl Scout cookies. The ones without chocolate. “Do-si-Dos” is obviously a more fun name than “Peanut Butter Sandwich,” but by this point in the taste-test we were all pretty over peanut butter and one reviewer had even wandered off entirely. Some found the Do-si-Do to be more buttery and crisper than the O.C. competitor.

There are people out there who don’t know about Samoas because they come from places where they have only been exposed to Caramel deLites. That is obviously a tragedy. We were unanimous on the superiority of the Samoa version, from the thicker caramel layer, to the tastier chocolate, to the more appealing color. The nicest descriptor we logged for the ABC cookie was “dusty.”

The Shortbread is basically a nothing cookie. It was described as “pale,” “like a thick-ass cracker,” and having a “disturbing lack of any aroma.” By comparison, the Little Brownie version, Trefoil, was a simple but nice, Nilla Wafer-ish cookie that we preferred.

As was the case with S’mores, these are just two totally different cookies that are both “something with lemon,” but otherwise have nothing in common. Savannah Smiles are small, Mexican wedding cookie-style sweets, coated in powdered sugar. Lemonades are a large, round cookie with a layer of lemon icing on the bottoms. Reactions to Savannah Smiles were actually pretty positive. Reactions to Lemonades included “Why are these even a cookie?” Our O.C. operative was able to score us a box of this limited cookie, which has no even indirect counterpart on the Little Brownie menu. Thanks-a-Lots, seem like they have a super passive-aggressive sounding name, until you taste them and realize that, plus a fake, squinty smile is actually exactly how you would react to someone bringing you these when you said you wanted Girl Scout cookies.