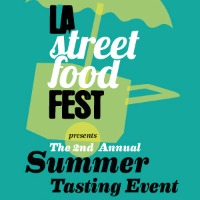 Share
Email
Facebook
Twitter
Pinterest
ReddIt
The Woodstock of food truck fests has returned to the Rose Bowl with the annoucement of the 2nd annual LA Street Food Fest. This year the event will play host to not only to a large selection of gourmet food trucks, but also an array of celebrity chefs and street food-inspired dishes from local restaurants, which in total amounts to over 75 food vendors.
The grounds have also been expanded to include nearby Brookside Park, ensureing that space concerns from the previous year have been met. Also new are the introduction of three attendance-capped sessions that will divide the event into separate time slots to prevent over-crowding.
The $60 ticket includes food tastings from all food vendors, access to the Singha beer garden, and specialty cocktails from Sailor Jerry Rum, Leblon Cachaca and Camarena Tequila. VIP admission, at $75, offers access to a tented VIP lounge hosted by Test Kitchen which features a private bar with Julian Cox and Hendricks Gin, a selection of special hors d’oeuvres, and a massage parlor(!). Tickets are on sale this week, and will likely sell out as quickly as they did last year.