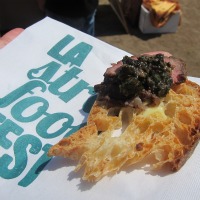 Share
Email
Facebook
Twitter
Pinterest
ReddIt
As comedian Albert Brooks tweeted Sunday morning: “If we would close the freeways every weekend, we would have a great society.” We couldn’t agree more. The Y2K-esque hype of “Carmageddon” led to a windfall of empty freeways for some, but those who most benefited were undoubtedly this year’s guests at the L.A. Street Food Fest in Pasadena. Compared to last year, which found the Rose Bowl swamped with lines that made the DMV seem efficient, this year’s festival was decidedly less crowded. That meant those who “braved” the freeway were rewarded with plentiful food and drink and practically non-existent lines.

Populist favorites like the Grilled Cheese Truck, Frysmith, and Starry Kitchen were all on hand, along with Mexican street food vendors such as Mariscos Jalisco, Mexicali Tacos, and Antojitos Carmen. But it was the “Baja Row” that stole the show. This small collection of booths featured a stellar array of culinary talent from south of the border, gourmet and otherwise. Chef Javier Plascencia (of Tijuana restaurant Mision 19) served up an Oyster Asada, a smoked oyster drizzled with serrano ponzu, lemongrass foam, and crispy bits of chicharron that proved to be the most elegant dish of festival. Mariscos Guerrerense, a street vendor from Ensenada, also doled out spectacular stewed uni tostadas topped with a variety of fresh chile-spiked salsas.

The all-star cast of judges, which included Walter Manzke, Michael Voltaggio, Marcela Valladolid, Jonathan Gold, and our own dine editor Lesley Barger Suter, crowned the winners at the end of the night, leaving the other participants to console themselves with a Singha beer or a CoolHaus ice cream sandwich.