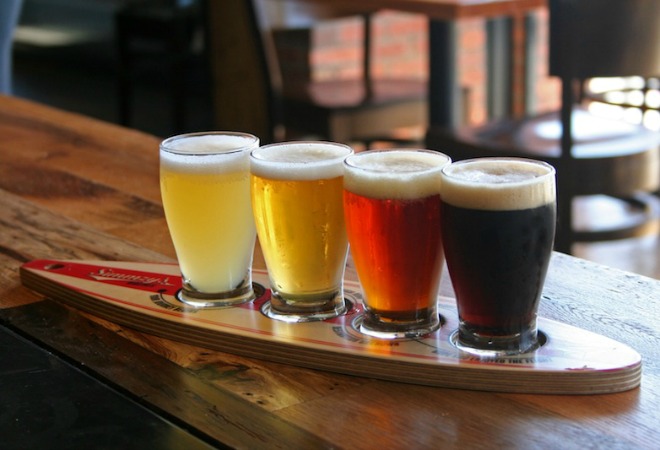 Blood Drive at Plan Check – 4/5
Donate blood in return for a free donut and beer? Sounds like a good deal to us!  Stop by West L.A.’s  Plan Check restaurant, between 10 a.m. to 4 p.m. and donate blood to the American Red Cross Blood Drive. In exchange, participants will receive a complimentary beer and one of the chef’s famous crullers. More information.

Northern Thai Feast at Night+Market – 4/5
Seats are scarce—in fact, they may be sold out—but West Hollywood’s Thai street food café Night+Market is celebrating Thai New Year with an exclusive “Songkran” dinner. Kris Yenbamroong will team up with the James Beard Award-winning chef of New York’s Pok Pok, Andy Ricker, to create a feast of northern Thai cuisine. The dinner is sponsored by Singha, so chosen diners can expect plenty of beer to accompany the Thai creations. More information.

Sushi Showdown at RA Sushi – 4/7
Think you can eat sushi like a pro? RA Sushi is hosting a sushi-eating contest being held at all locations today from 3 to 6 p.m. Competitors will compete for a grand prize of free sushi for a year, and each location will crown one winner. Bystanders can cheer for contestants while enjoying featured specials such as $5 Freethrow Bombs, $6 Throwdown Rolls, and more. You’d better hurry—the deadline to sign up as a competitor is April 4. More information.

Simmzy’s House-Aged Clutch Release – 4/9
Manhattan Beach gastropub Simmzy’s debuts its first house-aged beer, a dark sour ale. The New Belgian Clutch has been aging since 2011 and will be poured by the glass along with other New Belgian brews for between $6.50 and $7.50. A goat cheese soufflé with bacon, dates, and coffee-cherries is available to help soak up the brewskis. The beer gets tapped at 5 p.m. More information.

Stefan Richter’s $15 15th Anniversary Menu at L.A. Farm – 4/9 to 4/10
Born in Finland and raised in Germany, Top Chef alum Stefan Richter celebrates his 15th year in the U.S. with a special anniversary menu at his Santa Monica restaurant, L.A. Farm. On April 9 and 10, Richter will feature a special $15 three-course menu from 5:30 to 10 p.m. that stars gravlax with a dill-mustard sauce and watercress, smoked potato soup, and German sausage with sauerkraut in a beer sauce. More information.

“Pretzels and Ponies” at Tom Bergin’s – through April
In honor of soft pretzel month (yes, it’s a thing), Tom Bergin’s is offering a rotating series of pretzel and beer pairings throughout April. Winner of Los Angeles magazine’s 2012 Best of L.A. award for top soft pretzel, the famed Tom Bergin’s twist will accompany a seven-ounce beer for just $9. Expect a different beer offered each week alongside the salty knots. More information.