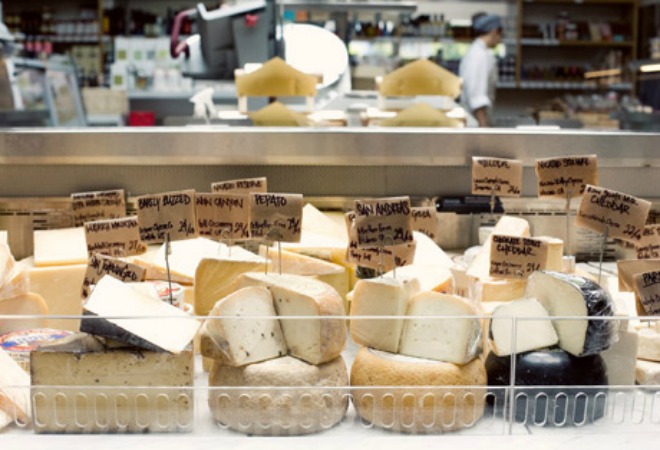 Free Grilled Cheese at the Melt – 4/12
In honor of National Grilled Cheese Day (yes, there’s a day and a month), the Melt will offer complimentary cheesy goodies to the first 10,000 people who sign up online at eatcheese.com by Friday, April 12. The Melt’s new menu features additional ways to customize your food and dishes that include a braised-short-rib melt, a mushroom melt, a Thanksgiving melt, and a macaroni and cheese-inspired melt. All-day breakfast melts and artisanal ice cream are also available. More information.

Machneyuda Guest Chef Dinner at Jar – 4/13
Experience the flavors of Jerusalem at Jar as Susan Tracht welcomes guest chefs Assaf Granit and Uri Navon of Jerusalem’s esteemed market restaurant, Machneyuda. In celebration of the 65th anniversary of Israel’s independence, the chefs will conjure up a four-course menu of Israeli cuisine with dishes such as Moshiko’s calamari, shikshukit, and basbusa. Paired wines donated by Herzog Wine Cellars will be included. The feast costs $125 per person and proceeds will benefit Ultimate Peace; reservations recommended.  More information.

Tony’s Darts Away 3rd Anniversary – 4/13 to 4/14
Burbank’s craft-beer destination, Tony’s Darts Away, celebrates its three-year anniversary with a weekend full of festivities. The pub will be tapping specialty brews including the release of Darts Away IPA, a collaboration with Golden Road Brewing, vintage selections from other local breweries, and more. A special menu will feature dishes chosen by fans on instagram, such as vegan and non-vegan sausages and vegan biscuits and gravy, to name a few. Entrance is free, but $15 will get you a keepsake glass and guaranteed first-tastes of the specialty beers. More information.

Traditional Texas BBQ Fundraiser at Tony’s Saloon – 4/14
Nosh on good ‘ol fashioned Texas barbecue for a good cause at Downtown’s Tony’s Saloon from noon to 5 p.m. Jonathan Peters (Palihouse) teams up with Greg Bernhardt (ACME, Church & State) and James Trees (FIG) to conjure up traditional barbecue goodness, such as pulled pork, sliced brisket, beans, cole slaw, and more. The good cause? Helping out close friends who were the victims of a terrible hit and run. The suggested donation is $20. More information.

Nate Appleman ‘Cooks with Friends’ at Animal – 4/15
New York chef and James Beard Award winner Nate Appleman joins Jon Shook and Vinny Dotolo for the next installment in the Animal charity dinner series, Cooking with Friends. Appleman will collaborate with Shook and Dotolo for a one-night-only eight-course Italian feast. A portion of the proceeds will go to Appleman’s charity of choice, the Kawasaki Foundation. The price is $135 per person, with wine pairings extra. Reservations required. More information.

The Wine Hotel’s Winemaker Dinner at Lucques – 4/15
The Wine Hotel welcomes French winemaker Audrey Braccini of Domaine J.A. Ferret for an intimate dinner at Lucques. Thirteen wines will be showcased in six flights to complement a six-course menu prepared by chef Suzanne Goin. Among the offerings are magnums of 1996, 1997, and 1998 hors classée les mènètriéres, to name a few. The price for the dinner is $225 per person; seating begins at 6:30 p.m. Reservations recommended.  More information.