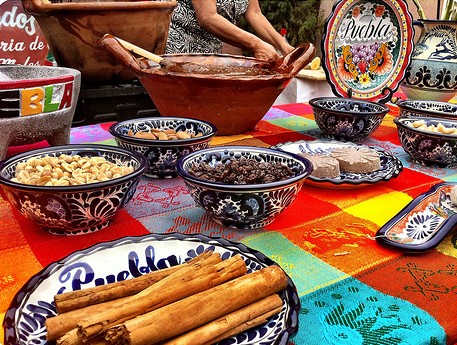 Like other food that carries deep, emotional meaning, the dish has pitted two states against one another for mole supremacy: Puebla and Oaxaca. This ongoing battle takes center stage at the festival. One legend says Mother Andrea de la Asuncion from the Santa Rosa Convent in Puebla mixed together the first mole ingredients that was brought on by a “divine wind” for the sympathy of Viceroy Tomas Antonio. Generally speaking, it is thought that a modern version of mole poblano was born after Spanish soldiers invaded the territory and introduced ingredients like clove, cinnamon, and almonds, which were eventually adapted to the sauce. But in terms of breadth, Oaxaca takes the pastel: negro, rojo, coloradito, mancha manteles, verde, amarillo, and chichilo make up a colorful spectrum. For a crash course, just head to Rocio’s Mole de los Dioses and stock up on those green cactus tortillas while you’re at it.

Elenita’s Mole, Moles Tepatlaxco, El Valle Oaxaqueno, Juquila Restaurant are a few of the participants among a host of other mole makers and sweet shops, including Mr. Churro. Special guest and native Pueblan Chef Jose Cepeda Gonzalez will lead a discussion on ‘Mole de Caderas,’ a traditional Mixtec dish prepared with goat meat, and the internationally esteemed Puebla restaurant El Mural de Los Poblanos will have a demo on pipian verde, rojo, and mole poblano. And hopefully there will be some “divine winds” at work to cool us down in the inevitable scorching heat. Please.