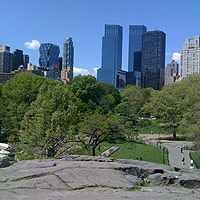 Last week, I reflected on my recent visit to some of New York’s delicious new retail spots like Whole Foods Beer (why don’t we have this?!) and Mario Batali’s Eataly (we soon will!). But with no kitchen in my 3×6-foot hotel room, most of my meals were taken at one of Manhattan’s 18,696 restaurants. How to limit the choices? I sent out a Facebook S.O.S. before I left L.A. asking for recommendations, which only served to overwhelm me more. Meatball Shop: Best thing ever or overrated? Fatty Crab or Luke’s Lobster? How many Momofuku’s ARE there now, anyway? I decided to plan just a couple of meals ahead of time and wing the rest once I got there.

Among the restaurants that required some advance planning was Má Pêche, one of the more recent additions to David Chang’s Momofuku empire. The grand underground dining room felt like a noisy, sriracha-soaked tent on a Saturday night. We were seated at a small table in the back, directly next to a large party who had ordered (in advance) the “Beef 7 Ways” degustation menu—available for groups of 10 or more with a few days notice. We watched enviously as trays of beef tartare, spicy beef ribs, and more were paraded passed our table throughout the night, leaving us wishing for eight more friends. As a party of two, we could only live vicariously. Still, the regular menu had plenty of gems. We started with a dish of black rice studded with artichoke hearts, bits of duck sausage, and a cured egg yolk. Verdict: Rich, tasty, but definitely in-need of hot sauce (which was thankfully already on the table). The fried soft-shell crabs with pickled lotus root, jicama, and sugar snap peas were ok, but again, I wanted a little more punch. Black cod with chamomile, fennel, and ramps was more on point with its delicacy. I considered the pork chop (when we asked about the $68 price tag, the waiter made the internationally understood hand signal for “THIS BIG”), but instead saved room for a cheese platter and the infamous Crack Pie. I will say this: the dessert is aptly named. I’ve had it once before and within 24 hours of being back in New York I was back, hungry for crack. My overall impression of the place? Maybe it’s because I had just been to Sang Yoon’s new Southeast Asian spot, Lukshon, the week before, but I felt like each dish could be done better and bolder. Has Roy Choi’s in-your-face approach to ethnic mish-mash spoiled me forever? I’m not sure, but I do know that there are really only two reasons I’ll hit up Má Pêche again: 1) Beef Seven Ways. 2) Crack Pie (what can I say? I’m hooked!)

The other truly upscale spot on my to-go list was Marea. Well, actually, I had a few others on my list as well but was unable to score a table even two weeks in advance. Michael White’s swanky shrine to seafood, however, had an opening, and considering that it was up for a James Beard Award (the reason for my trip, after all), it seemed a good fit. The room was quiet, candlelit, and full of what seemed to be regulars. (At these prices, that’s impressive.) Service was starched, somber, and spot-on. The menu was fish in all forms. An extensive crudo list featured sepia, snapper, pacific needlefish, and razor clams and was definitely the highlight of the meal. The “signature” nova scotia lobster with eggplant al funghetto and basil was ho-hum, as was a filet of branzino with grilled ramps and apricot mostarda. But I couldn’t deny the power of the house-made fusilli with red-wine-braised octopus tossed with gooey lumps of roasted bone marrow. I will definitely be trying this at home.

I ran into a former colleague on a Soho street corner who insisted I hit up Savoy for lunch. “It’s my favorite in the city,” he said. With that endorsement I walked into the cute, two-story spot and got a small table next to the window. The menu had me feeling confident—and close to home. Crostini with fava bean puree and lardo, a market pickle plate with pickled carrots, onions, and other gorgeous little veggies, charred octopus with shaved fennel. It was lovely and market-fresh, but I walked out feeling that it’s best to leave California cuisine to the Californians.

The most satisfying vacation meals are always the ones into which you stumble accidentally. Without the burden of expectation, delight comes with more ease. My trip fell over Mother’s day, and in a grand gesture I invited my own mom to join me in the big city. We strolled through Central Park until we got peckish and then wandered the streets until we found a place to grab a bite. We were drawn by the sight of white tablecloths on the sidewalk tucked just off West 54th Street and ended up with one of the most memorable meals of the trip. The place was Il Gattopardo (the name means “The Leopard”), and of the four other outdoor tables, three were occupied by actual Italians—always a good sign. Our lunch was simple: We split a cucumber and burrata salad and a summer squash ravioli. Add bread, wine, and serendipity on a perfect day in New York City—you can’t ask for much more.

Finally, the reason for the season: The James Beard Foundation Awards. The ceremony and subsequent Chef Gala were a blur. The setting—inside the Lincoln Center’s Avery Fisher Hall—would have given the night an air of importance even if Thomas Keller wasn’t waiting in line behind me. (That’s right, behind.) The ceremony itself was long, full of awkward presenter banter and some disappointing losses for Los Angeles. My favorite part, though, was (and always is) the America’s Classics awards. A number of great, down-home American eateries are honored by the Beard Foundation every year, and during the awards a short documentary about each is screened for the crowd. (Check out the videos here. Grab some tissues.) The gala was, well, it was a cluster… As our restaurant critic Patric Kuh likes to say, “It’s like 200 of the country’s finest chefs have never seen food before.” The theme this year was “The Ultimate Melting Pot,” and the whole event was curated in part by our own Susan Feniger. Our home team included Mohan Ismail (Rocksugar Asian Kitchen) who put out caramel tiger shrimp, and Octavio Becerra (Palate) who wowed us with his banh mi of pork belly. There were plenty of tasty bites, but what do we remember two weeks later? Meeting Jacques Pepin (however so briefly) and petting a small pig in a tuxedo named Mortimer. I’m not sure why he was there (the pig, not Jacques Pepin), but I wanted to take him home with me and felt more than a little bad about eating a second pork belly banh mi with pig’s ears. But then again, not really.

Read Part 1: In which dine editor Lesley Bargar Suter shops (for food) till she drops.