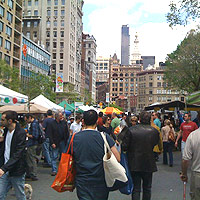 Share
Email
Facebook
Twitter
Pinterest
ReddIt
…In which dine editor Lesley Bargar Suter shops (for food) ‘till she drops.
If you’re a prolific consumer of local food media, you’ve probably noticed the recent spate of New York-focused culinary coverage. There’s a reason for that. Last week, hungry food writers and editors (including myself) flocked to the Big Apple in droves for the James Beard Foundation Awards in hopes of rubbing elbows with Jacques Pepin (I did!), picking up a coveted journalism medal (we did!), and sampling the food of our East Coast competitors. After all, New York is L.A.’s culinary rival—whether they think so or not. They’re the Trojans to our Bruins. The boxers to our briefs. The paper to our scissors. The “less filling” to our “great taste.” So after a full six days of eating my way around Manhattan (I purposefully left Brooklyn out of the running this trip, which a local pal claims actually makes me hip—go figure?) who seems to be on top? Possibly, the underdog.

I wasn’t in the city but ten minutes before I stumbled into Whole Foods Beer. The Bowery Whole Foods annex sells all manner of brew until 1 a.m., and offers refillable growlers for any of the rotating small-batch brewers on tap. Rather make your own? The store doubles as a home brewer supply shop, carrying everything from PVC pipe to hops. Now, I’ve been told that the reason this separate (and stupendous) store exists is because of New York laws prohibiting grocery stores from selling alcohol. So, I guess we should be thankful we can stock up on beer, wine, and hooch at the same place we scoop up our Lucky Charms and cat litter. Still, this store had a great feel—somewhere between the Eagle Rock Brewery’s tap room and Cuver City’s Home Brewing Supply shop—and Whole Foods should think about bringing one out West.

One retail operation we will be seeing firsthand is Mario Batali and Joseph Bastianich’s Eataly. Rumors were swirling a few weeks back that Bastianich has been scouting for locations—and possibly even found one—for his temple of Italian food in L.A. I hadn’t been into the Flatiron District location, so I figured this was a good time to get a sense of where I’d be buying all my salumi come 2012. The 50,000 square foot emporium looks as if Sur La Table and Whole Foods made sweet, Tuscan love and birthed an Italian giant. It’s massive—overwhelming, in fact—and everything’s gorgeous, from the twirls of fresh buckwheat pasta to the glistening salmon filets to the avant-garde Alessi cheese grater. But I have a bone to pick with the sit-down restaurants inside. Each station operates independently of one another, which means that grabbing a softball-size arancini from the panini stand and then joining your salad-eating friend at the vegetable restaurant is strictly verboten. Trying to give my friend a taste of my to-go prosciutto sandwich while she savored bean soup resulted in verbal reprimands. And for beer, I was limited to a minute Moretti selection while not 20 feet away stood an extensive craft beer display. Don’t get me wrong, the place is incredible, but from a service perspective they’ll need to loosen up a bit for L.A. diners. We get our feathers ruffled if we’re told we can’t use ketchup. Imagine the uproar if the Father’s Office’s Sang Yoon made you sit at different tables depending on if you wanted mussels or a burger? I’d recommend  making a few systematic alterations for Eataly’s L.A. incarnation.

What we’d love to see here as is? A little pop-up food court like the one we wandered into at Madison Square Park, which in actuality occupied something more like a small median near the corner of 5th and 23rd. The mini-food fest, which launched on May 6 and will run through June 5, features a greatest-hits of some of New York’s buzziest restaurants and food artisans: Momofuko Milk Bar, Asia Dog, Roberta’s Wood-Fired Pizza, Bar Suzette crepes, our good friend Eataly, Sigmund Pretzels. The longest line, though was for Calexico Carne Asada. In fact, the longest lines I saw throughout my New York trip were for tacos. A friend explained, “Our Mexican food is so sh*tty that even a decent taco draws a crowd.” Makes sense. The tiny Madison Square plaza was packed by lunch hour with men in sky-blue button-ups (ties off at lunch) and gals with giant purses, and I was reminded of how enthusiastic New Yorkers are about their mid-day meal. (Zach, you’ve been telling me this for years.) The feeling was not all that dissimilar from the one outside my own office building on Wilshire every day, where a dozen or so food trucks gather. But the temporary structure felt somehow less competitive and more like a genuine happening. If we were to set up our own gourmet tent city, who would we want there? Tavern? Angeli Caffe? Lukshon? Scoops? Let me know in your comments.

Coming up next time, Part II: In which dine editor Lesley Bargar Suter eats at fancy restaurants and pets a pig in a tuxedo. Plus, a delicious slideshow!