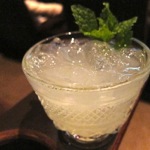 The first thing traveling cocktail geeks look for when they set foot in a new town is the best place to grab a drink. We poll the locals, research reviews, and strategize bar hop itineraries. Cocktail Instagrams and hazy recollections are our souvenirs. Such was the case when I recently visited Portland, which hosted its 3rd annual cocktail week in October. For a town nicknamed Beervana (and rightfully so), Portland also proved itself a worthy cocktail destination.

A gang of L.A. bloggers, myself included, discovered must-hit bars ranging from beloved dives to new craft cocktail bars to strip club standbys. (Bonus that the prices were so cheap compared to L.A.; under $10 for most cocktails!) And after we returned from the week-long festivities, our livers still healing, I compared notes with my colleagues, finding out what their favorite cocktail and/or bar was. For everyone, narrowing it down to just one pick was difficult, but here are our answers.

Yours truly (Caroline on Crack): The bar I wish I got to spend more time in was Kask, a newish watering hole that’s adjacent to the buzzed-about restaurant Grüner and accessible via a back hallway connecting the two venues together or, if you want to be boring, through the front door. The vibe and clientele were chill, Nirvana’s “All Apologies” played through the speakers, and you could tell this was a bartenders’ hangout by the notes scrawled on the blackboard wall from visiting cocktailians. It was industry yet welcoming, with an impressive cocktail list that was simple yet adventurous.
Kask, 1215 SW Alder St., Portland, grunerpdx.com/kask

Daniel Djang (Thirsty in LA): “My favorite drink was the Spanish Coffee at Huber’s. It was recommended to us by Anu Apte of Seattle’s Rob Roy. It’s made with Bacardi 151 rum, Bols Triple Sec, Kahlua, coffee, fresh whipped cream, and a touch of nutmeg on top. It’s made tableside with some nice flair: flaming glasses and long, behind-the-head pours. Huber’s is the oldest restaurant in Portland, opened in 1879. Sipping a Spanish Coffee on a cold, rainy day in that beautiful, historic room is a can’t miss experience!”
Huber’s Cafe, 411 SW 3rd Ave., Portland, hubers.com

Esther Tseng (EstarLA): “What I really liked about Rum Club was that I loved the bar both when it was slammed and when it was calm. I loved my time both when L.A.’s Caña Rum Club took over (and it was five-deep around the uniquely oval-shaped bar) and when I walked in on Friday night (and easily got a seat at said bar). The classic but not-so-obvious rock playlist leaned punk while Rum Club managed to maintain a low-key vibe. Plus, there was accessibility: I sat next to boys drinking Tecate while the lady bartender took a mallet to ice in a canvas bag. And as should be true at all rum bars, the daiquiris were stiff and tasty. Every cocktail I had there, whether rum- or Amaro-based, was perfectly executed and delicious.”
Rum Club, 720 SE Sandy Blvd., Portland, rumclubpdx.com

Ron Dolette (Lush Angeles and former Portlander): “I love Beaker & Flask because it’s the type of place where no matter what mood I’m in, they’ve got a cocktail that fits it. I can go low proof with a vermouth-centric cocktail, I can go with a beer cocktail (including cocktail boilermakers), something garden fresh, or something stirred and boozy. It’s also a great spot to go if you’re just interested in sipping on neat spirits. Also, it’s just a very short drunken stumble for me to close out the evening at Rum Club.”
Beaker & Flask, 727 SE Washington St., Portland, beakerandflask.com