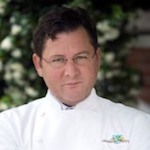 The food world is reeling today after learning, this morning, of Chicago-based chef Charlie Trotter’s passing. The multi-starred chef was found dead in his home, reports the Chicago Tribune.

When I was a kid in Chicago in the ’90s, I watched Charlie Trotter, always buttoned up next to the ebullient Julia Child, on PBS. I studied his cookbooks while I dreamed of culinary school and plotted my own restaurant concept. It wasn’t until five or six years ago that I was able to meet him at his eponymous restaurant. I wondered what the future would bring when he closed Charlie Trotter’s last year. Needless to say, I was stunned when, early this morning, my mother texted me to say, “I’m so sorry Daniela, I just heard that Charlie Trotter died…”

Many Los Angeles-based chefs have memories of working with the influential Trotter. He trained hundreds of cooks and chefs during his lengthy career.

Chef David Myers’ (Comme Ça, Hinoki & the Bird) first job in a kitchen was at Charlie Trotter’s. Myers spoke out on Twitter earlier today and wrote to us in an email: “Chef Trotter greatly influenced my life both personally and professionally. He was not only a chef and mentor but a friend. I have incredibly fond memories of working in his kitchen. From the moment I first read his book I was inspired beyond belief. Little did I know that working in his kitchen would have such a great influence on my life. Throughout my time with him, Charlie taught me so much and made me feel like I could accomplish anything. He was truly a Great man who influenced so many incredible chefs. His words to me will ring on forever.”

Reached by phone this morning, chef Roy Choi said he was “in shock, I can’t believe it. I didn’t know him personally, but I looked up to him. With Emeril and Norman van Aken, he was part of the food world’s Mount Rushmore.”

Patina’s Joachim Splichal wrote in a note, “I knew Charlie for 25 years and had the pleasure of working beside him for several dinners at his Chicago restaurant. We were not only colleagues but friends. He was a true inspiration to the culinary community both here in the United States and aboard. He will be deeply missed.”

Chef José Andrés (The Bazaar) tweeted, “Let’s celebrate his amazing contribution to America and the world. He was a genuine person. Today heaven will eat better….”

Patric Kuh, the magazine’s restaurant critic, once worked with Trotter: “He was incredibly detail oriented. I spent a day in his kitchen about ten years ago and it was impressive the way he led the wait staff through every dish during the lineup before the doors opened. One could tell that he wanted the wait staff to ask questions—all kinds—so they could have whatever answer the customer needed. One more example of his level of attention was when I arrived in the morning I was handed a chef’s jacket with my name on it to wear. It was a gift. I will treasure it now more than ever.”

A toast, to Charlie Trotter, friend and mentor to many, a classicist who taught a lot of us how to take dining seriously—at home and out.