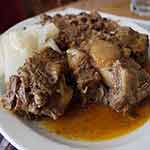 When I first heard La Caridad (named after the Virgin of Charity, Cuba’s most important religious site) was closing until they got a new location, a moderate level of panic coursed through my garlic-infused veins. (A natural reaction since this was going to put a damper on my weekly visits.)

La Caridad has been an L.A. institution since 1971, operating continuously under several different owners until Havana-born Orestes Garcia purchased it in 1988. Ownership changes aside, many of the restaurant’s recipes have remained the same since the restaurant first opened on Temple some 41 years ago. Their food is Cuban-Creole cooking at its best, with a deep flavor base called mojo that sends a wonderful aroma wafting from homes and paladares in Havana.

When they had to close for relocation earlier this year, in typical Caribbean fashion, they simply said, “Our number will still be the same; just give us a call in about a month.” As promised, they did re-open, settling down in the former Colombian restaurant La Chibcha’s space on Sunset, much to the rejoicing of the elder Cuban ex-pat, Caribbean, and Mexican regulars that missed and craved La Caridad’s wonderful daily specials.

Come in on Mondays for slow-cooked pork shank, called lacón, dripping with that mouth-watering mojo marinade served with Moros y Cristianos, Cuba’s tasty black bean and white rice tribute to their Moorish and European ancestors, or get the soupy red beans and rice. Mondays, Wednesdays, and Saturdays are for juicy rabo encendido, oxtail so good it induces the clientele to employ every carb on the table to wipe the plate clean of beef-rich drippings.

Grab a potaje, or bean stew, if it’s on the menu, especially the one prepared with a garlic- and pork-laden puree of garbanzo beans. After trying their papa rellena, a soft potato and beef croquette, you’ll wonder why you’d want to have this flavor bomb anywhere else. Quite simply, La Caridad’s is the best in town.

Whatever you end up ordering, I think you’ll agree: their mojo hand is strong.