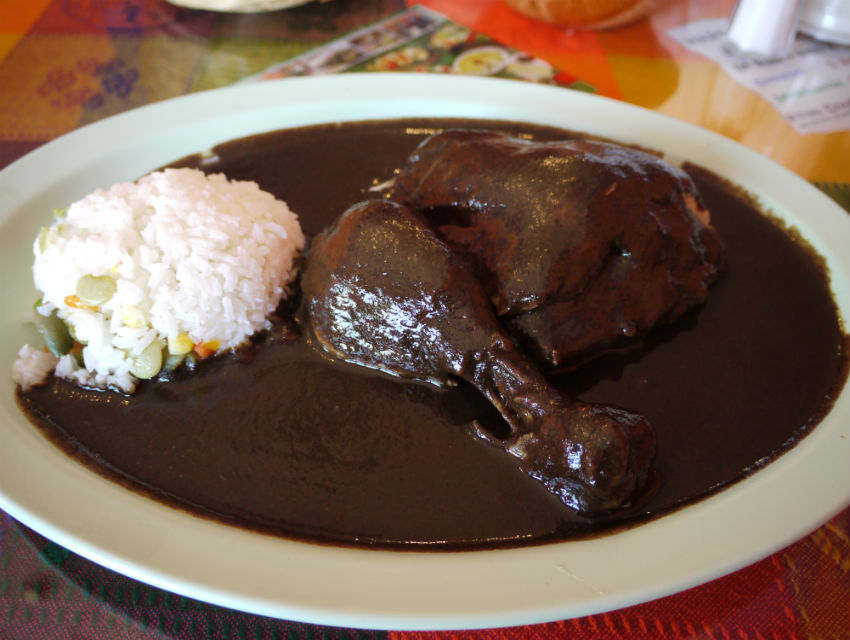 There are more than 300 varieties of mole in Mexico, and although it’s one of the most famous Mexican dishes, it remains one of the most misunderstood preparations north of the border. Mole is not a sauce to add flavor to a dish—it is the dish. All other elements on the plate exist to eat with the mole: proteins, pure corn tamales, rice, sometimes beans, and corn tortillas.

The two most well known moles, mole poblano and mole negro oaxaqueño, are regionally tied and boast more than 30 ingredients. But that’s not the same for all: Some moles only have a handful ingredients and can be found in almost every state in Mexico.

At their most basic, moles are a pre-Hispanic family of dishes with a base of fresh or dried chiles, which are thickened with tortillas, bread, or masa, and flavored with herbs and spices. Included in the spectrum of moles are also pipianes (pumpkin seed based), adobos (made with vinegar), and a variety of regional names of this classic dish that can be found all over Los Angeles.

* At the time of publishing this article, Rocio’s Moles de Los Dioses was closed until further notice due to an arson fire, and therefore wasn’t included in this list.

El Texanito, 4501 S Alameda St., Central Alameda, (323) 233-2261
Hidden deep within the bowels of the El Faro Plaza, across the street from the Alameda Swap Meet is a traditional market comedor, or eatery, with good home cooked Mexican food. On the weekends, and if you call it in, Cristina, one of the cooks, will whip up a typical mole poblano made with just chiles, tomatoes and around a dozen ingredients (no chocolate) that she learned from the previous cook. Is it as good as the original? Who knows, but it is one of the best moles you can find in L.A. and well worth the maze you’ll navigate to find this place.

Gish Bac, 4163 W Washington Bl., Mid-City, (323) 737-5050
Most of our Oaxacan moles in L.A. come from the Valles Centrales region of Oaxaca like at Gish Bac, where you can get mole negro, amarillo and a silky smooth mole coloradito, made with chile ancho, chile chilcostle (or a substitute), tomato and bitter chocolate in addition to a long list of herbs and spices.

Guelaguetza, 3014 W Olympic Bl., Koreatown, (213) 427-0600
No one has done more than the Lopez family in promoting mole in L.A. at their James Beard Award winning Guelaguetza Restaurant in Koreatown. You can be initiated with their festival de moles, a sampler of 4 of the 6 moles served at the 21-year-old Oaxacalifornia institution, including their estofado, a mole made with tomatillo, chiles, raisins and spices with a garnish of green olives and chile jalapeño worthy of America’s Classics.

La Casita Mexicana, 4030 Gage Ave., Bell, (323) 773-1898
Chefs Jaime Martin del Campo and Ramiro Arvizu of La Casita Mexicana were the first to introduce Mexican haute cuisine-style moles and pipianes to Los Angeles when they opened their doors in 1998. Their tres moles features handcrafted a 46-ingredient mole poblano, pipian verde and a sublime pipian rojo beautifully arranged on a plate that’s a delicious throw back to the age of the Divas of the Mexican Kitchen, which included Martha Chapa, Susana Palazuelos and Patricia Quintana.

La Finca Restaurante, 10533 Inglewood Ave., Lennox, (323) 331-2431
Sometimes a mole is simply a dish that’s been passed down for generations that you cook up for special occasions which is the case at a new fonda in Lennox serving traditional Mexican antojitos and guisados. The weekend mole served at La Finca is actually an adobo, which is made with vinegar, and the only place in town preparing this lesser known mole north of the border.

Las 7 Regiones de Oaxaca, 2648 W Pico Bl., Pico-Union, (213) 385-7458
Lidia Chavez’s Pico-Union restaurant makes the best mole negro oaxaqueño in town–one the most baroque of moles—and a comforting mole amarillo sealed in an empanada or in a bowl. There are 5 Oaxacan moles in all at one of L.A.’s oldest and finest Oaxacan restaurants that’s been a fixture in Oaxacalifornia since 1998.

Las Michoacanas, 8420 State Ave., South Gate, 323-215-9570 and 323-563-0029
At this new Michoacan style restaurant in South Gate, the typical Michoacan-style mole made with thick and spicy chile guajillo reminds us that mole isn’t just about Oaxaca and Puebla. Get an order of mole with a corunda, a star-shaped tamal that’s an edible pre-Hispanic utensil for savoring moles.

Las Molenderas, 2635 Whittier Bl., Boyle Heights, (323) 269-2812
Marisol Feregrino had an idea; take her mom, Estela Morales’ traditional Pueblan moles and pipianes and market them to a Mexican-American audience using French fries and tacos alongside traditional preparations. Whether you have the pumpkin seed based pipian verde, rojo or al chipotle on fries, mole poblano on fried eggs, or mole al chipotle with a boiled drumstick, rice and beans, you are at the best place in Los Angeles to experience artisanal moles as good as you’d find in Puebla.

Mariscos El Cristalazo, 1665 N Hacienda Bl., La Puente, (626) 918-0863
A rare mole in the United States, tixtihuil, a masa-thickened mole of chile guajillo, chile de arbol for an extra kick and shrimp is one of the most important cultural dishes of Ninive Vargas’ hometown of Escuinapa, Sinaloa. For people who’ve only tasted moles made with chocolate and the spicing of the Columbian Exchange, tixtihuil is an eye opening and delicious lesson on the depth and range of Mexico’s 300+ traditional moles.

Rocio’s Mexican Kitchen, 7891 Garfield Ave., Bell Gardens, (562) 659-7800
For her first restaurant as chef/owner, L.A.’s mole queen, chef Rocio Camacho, has narrowed the mole portion of the menu down to a handful of traditional moles like her tangy pipian rojo (red pumpkin seed mole) or a fresh, herb laced mole verde (green mole). This is the best cooking we’ve seen from Camacho and while moles are a smaller part of this restaurant, the extra special attention given to the 5 moles on the menu have raised the bar.