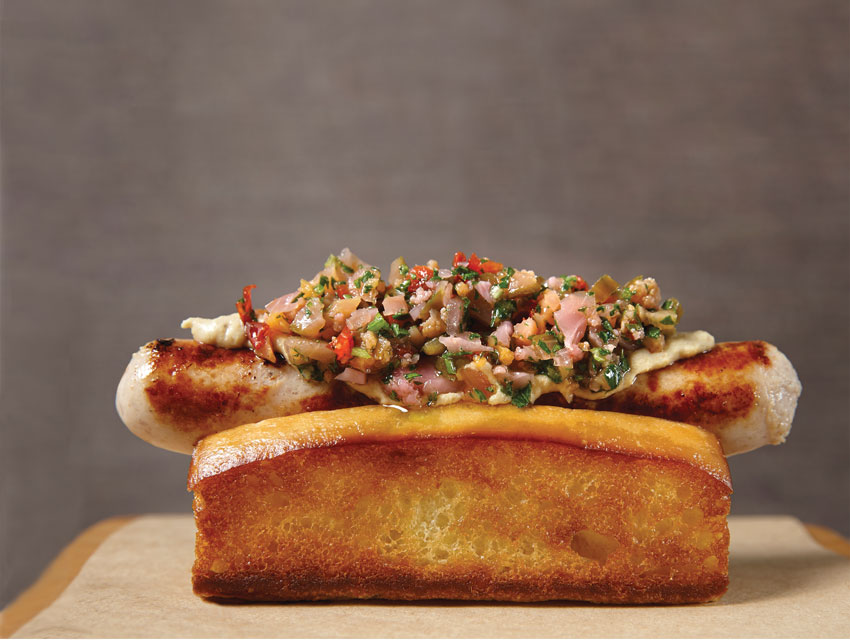 Ask for the reserve wine list at Love & Salt and you get a bit of a memento. The suede volume with pricey French wines is a holdover from when the restaurant was Café Pierre. The main list—the one you don’t have to request—is a gorgeous Italian collection in which no bottle is above $100 and most hover well below that. Café Pierre was never hoity, but with its tablecloths, mood lighting, and French fare, it did set out to establish itself as a dash of sophistication in Manhattan Beach, a community that was equal parts suburb and laid-back beach town when Pierre launched in 1977. Love & Salt is sophisticated, too, but in the steadfastly loose manner that is the mode today. It has the ampersand in its name, the house-cultured butter, and a one-page bill of fare that proposes ale-glazed roasted pig’s head. It also has something Café Pierre didn’t have to contend with for years: a packed dining room.

On my first visit to the new venture, I can detect nary a hint of what was once here. In the banquette near my table, a lady in a cowl-neck cashmere sweater watches as the waiter breaks a duck egg yolk onto a pizza freighted with pancetta, potato, and rosemary. Four guys sitting over glasses of La Chouffe Belgian ale nosh on a bowl of crisp fingerlings draped with wilted escarole. A fellow with sun-bleached hair and a surfer’s glow takes a taste of his barbera with a knowing nod. Me? I’m getting acquainted with the English muffins, which head the selection of small plates I’ve ordered. Billowing like meringues, with a base of toasted semolina, the pair of buttermilk beauties offer a response to the spectacular cheddary biscuits that David LeFevre prepares a few blocks closer to the ocean at M.B. Post. Between Post, LeFevre’s Fishing with Dynamite, the Strand House, and Darren’s, the food scene in Manhattan Beach has come a long way since the days when Café Pierre represented the refined counterpart to Ercolés, the corner dive that had been setting up shots for half a century.

When Guy Gabriele set up shop here, Gallic cuisine was still in a theatrical phase. Robaire’s on La Brea Avenue had its lovely mural of Paris; Ma Maison, its nonchalant AstroTurf floor. Soon enough L’Orangerie would be evoking the pomp of Versailles. Whether it was because of the sea breeze or Gabriele’s background (he was born in Tunis and raised in France by Italian parents), Café Pierre was never purist; gorgeous, parsley-packed escargots coexisted happily with a delicious rabbit cacciatore served under a drift of sautéed mushrooms and browned onions. As Manhattan Beach filled with professionals and athletes (the crème brûlée was named after Laker trainer Gary Vitti), Café Pierre changed with it, but after a series of tacks—small plates one year, a gaudy red paint job another—the business seemed to lose its identity.

Last April Gabriele and his daughter, Sylvie (they also operate Zazou, a Tuscan-Provençal spot in Redondo Beach), closed shop, readying for the November launch of Love & Salt. Designed by Ana Henton of Silver Lake’s MASS Architecture, which also designed Culver City’s Lukshon and a couple of the Intelligentsia satellites, the new dining room is coolly contemporary, its high, ribbed ceiling resembling the hull of a sloop. Pale wood furniture accents a room that is anchored by a long communal table, where diners peer across the pizza stands and hungrily pick at dovetailed spreads of Fra’ Mani soppressata as they take in a hockey game on the bar’s TVs.

Working in an open kitchen, 39-year-old chef Michael Fiorelli has put together a menu that has an Italian overlay but isn’t absolutist by any means. With those muffins and a mortadella “hot dog” how can it be? Splicing the heritage of the classic salume with the fun of beach food, the sausage sits pertly in a brioche-like bun from Suzanne Goin’s Larder and is strewn with florets of tangy pickled cauliflower and a dab of house-made mustard. On the other end of the spectrum, Fiorelli will haute up a bowl of rustic cavatap-pi pasta with bone marrow and cracked black pepper, presenting the curly noodles plain with only garlic butter so that the food runner can scrape the bubbling marrow from the split bone (held with a white napkin as if he were shaving truffles) before emptying the ramekin of parsley, bread crumbs, and Parmesan into it.

An Italian American from East Moriches on Long Island, Fiorelli trained in such formal settings as the legendary Greenbrier resort in West Virginia and the Inn at Little Washington in Virginia; more recently he was chef at Mar’Sel, the cozy cottage at Rancho Palos Verdes’ Terranea resort. Fiorelli came to L.A. when famed culinary recruiter Elizabeth Blau conscripted him to open Kerry Simon’s Simon LA at the Sofitel. The restaurant didn’t survive, but Fiorelli seems to have brought its sense of fun with him. This was a place that would put a salt-crusted pretzel in the bread basket, grace its eggs Benedict with lobster, and work cotton candy into a massive dessert platter that could have doubled as a stand at a county fair. At Love & Salt Fiorelli offers one head-turning platter of cheese and cured meats in the form of a three-foot plank. Instead of yet another Caesar, he features a compact endive salad, mining a creamy dressing with garlic and Parmesan, the anchovies lurking in the pale spears. Rather than croutons, fried chickpeas provide the crunch.

Not some dutiful appeal to healthful eating, the five-grain “Freekehlicious” salad is a supermoist blend of black rice, farro, red quinoa, and the roasted green wheat freekeh—tender but toothsome—with currants and toasted hazelnuts adding texture. The “Monday Morning Style” barge of grilled focaccia carries a rich tomato sauce (he stews lamb necks in it, removing them before serving) that’s given a hit of cracked black pepper, some breadcrumbs, and a drizzle of good olive oil. By invoking the pleasures of leftovers and the quasimagical way flavors deepen during a night in the fridge, the dish manages to be a stellar small portion and a heartfelt evocation of the multigenerational Sunday lunch. Though you won’t find any butterscotch pudding in “Not Another Budino,” you will get a satisfying column of cacao-dusted chocolate mousse on a cookie-like base—essentially a disciplined re-creation of a Kit Kat bar Michel Richard made famous.

It is a tricky balance that Fiorelli strikes. He knows the Italian canon and the classic repertoire, bridging the two with more offhand contemporary gestures, like heaping seared cauliflower leaves on mascarpone polenta. Most of the time his approach works well, though Fiorelli trips over the everything-is-better-with-pork trope. Potato gnoc-chi suffocate beneath sheets of prosciutto that are too big for a single bite, spoiling half the joy of eating the little dumplings. And the sliced pig’s ears have been blown out in the fryer, so they’re more like strips of greasy gristle than anything; the ramekin of rich buttermilk aioli hardly saves the dish from seeming like a halfhearted stab at gastropub grub.

There’s a lot more conviction in the corned lamb tongue panino. Served on rye bread, the tender meat and pickled peppers layered together with melted fontina, it’s potent yet delicate. Fiorelli elevates a chicken liver crostone with a shaving of guanciale, or pork cheek, that’s so thin and crisp, it shatters when you take a bite. In the same manner that other chefs are experimenting these days with heat, he spikes toast points of burrata and chopped braised leeks with dollops of house-pickled Fresno chiles to create boldly flavored finger food. For another small plate he presents a sliver of swordfish with precise diamond-patterned char marks on a caponata of grilled eggplant, green olives, and capers. A squib of deep red romesco sauce links all the flavors with its notes of ground nuts. Fiorelli seems drawn to that sort of give-and-take: mild contrasted with robust. To make the rigatoni, he perfumes olive oil with citrus and chile, poaching a loin of albacore in it. Then he allows the tuna to cool before flaking the flesh into tomato sauce finished with the intensely flavored oil.

As deft as Fiorelli is with fish, I can’t say I’ve tried the branzino: At $65, it’s about twice what a sea bass costs at Scopa Italian Roots ($32) or at smoke.oil.salt ($36). You’ll find it among the family-style platters, which include a whole roasted chicken that tears apart like a confit; croutons, wild arugula, and pan gravy push it into another realm altogether. For the rabbit porchetta Fiorelli debones the double loin and closes it around a sage-filled mousse, wrapping the saddle in Swiss chard and prosciutto so that the fat melts into the barrel as the exterior crisps. Roasted, sliced, and fanned out on a stew of black rice, pine nuts, farro, and currants, the dish looks as if it comes from an old-school master who, instead of building terrines or glazing banquet mirrors with aspic, has set out to create something completely of the times.

To me, that kind of revisionism is refreshing. Fiorelli is one of a shrinking number of chefs who, when he’s not working the line, will walk the dining room, exchanging a word or maybe just flashing a smile with customers while checking that the dishes aren’t all landing at once. I’ve seen Gabriele out here, too, delivering house-made arancello to tables after chef de cuisine Rebecca Merhej’s desserts come out on paper-lined boards. Merhej riffs on the traditional almond tart torta della nonna, leaving the nuts whole, with skin on, to contrast with the soft-as-pie filling. A quenelle of freshly churned coffee ice cream sits on top. The Meyer lemon tart is an arrowpoint of sweet acidity, while the panna cotta gently cushions pomegranate and streusel. I like them all, but I’m as content sipping coffee with a saucer of dimpled almond cookies, a cardboard container with an English muffin at the ready for tomorrow’s breakfast.

Noise Level: Can get loud

Kid Friendly? They even have high chairs

The Kuh Review: The Arthur J

Too Pretty to Eat: A Photo Tour of the Arthur J