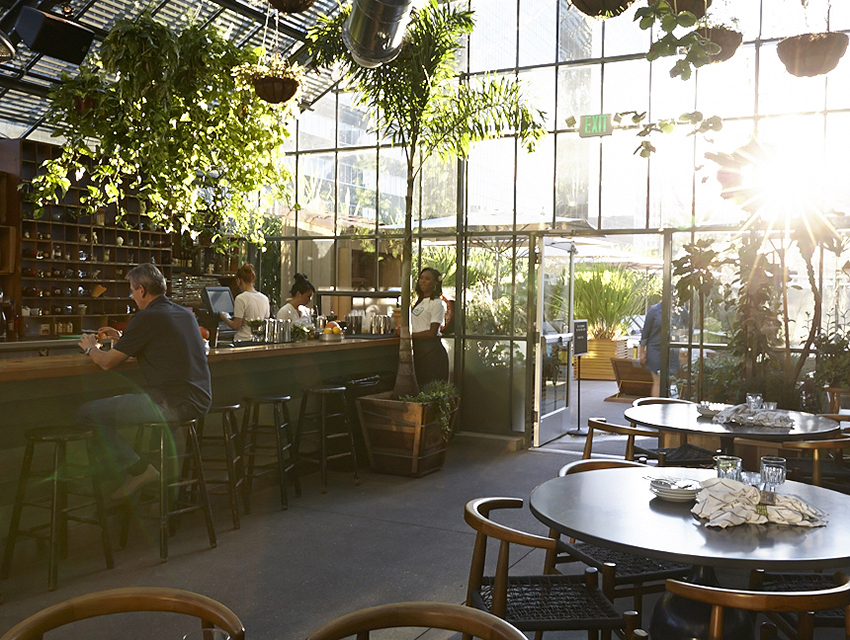 Right outside Commissary, on the low rooftop of Koreatown’s Line Hotel, a snug pool is surrounded by earth-tone parasols; a tight terrace that looks toward downtown becomes gradually more dramatic as the night sky fills with lights, the rumbling of traffic rising up from Wilshire and Normandie. Inside the greenhouse-like space, potted plants dangle below a glass ceiling whose spine is a pair of AC ducts. Mismatched wrinkled napkins tucked into playful rings lie piled on the long communal tables and the round ones orbiting them. The plates are mismatched, too, and cocktails arrive in those widemouthed plastic containers used for deli-bought potato salad. All is low-key, except of course the name behind the operation: Roy Choi.

The 44-year-old chef is often here; you might spot him on a bar stool in tie-dye and topknot, scrolling through messages or smiling benignly as he poses for a picture with diners. In 2008, he famously articulated a new form of eating when people began queuing up at his Kogi trucks to try grilled Korean short rib tacos laden with sesame-chile salsa and lime-splashed green onion relish. It was gloriously intense and multicultural, but more practically it reflected an L.A. chowhead’s appreciation for the city’s food. The street-level connoisseur who already had key addresses for good chili fries, dried shrimp banchan, and achiote-tinged al pastor soon had Kogi truck locations digitally plotted.

The magic of Choi’s cooking isn’t just the bro hug in which he wraps his arms around the entire city; it’s the sense of slightly over-the-top indulgence accompanying his food. If you have any doubts, go to Chego, Choi’s counterspace in Chinatown, and order the Ooey Gooey Fries, whose cute name translates into a trough of beer-battered potato spears in a pool of stretchy melted cheddar that have been strafed with browned cloves of garlic and soothed by a pink-hued sambal sour cream. It’s not like he eases off the pedal at A-Frame, where a serving of kettle corn laced with furikake, sesame fish powder, cayenne, and dehydrated pineapple fuels a happy interlude with a goblet of Hite or a demerara-sweetened old-fashioned.

At the Line the Choi-ian note is struck early. Just inside the door, past the row of bikes with leather Brooks saddles, a grab-and-go café (perfect for picking up a coffee and red bean bun on the way to the airport) serves a fantastic congee—crushed peanuts and garlic crumble ramping up the rice porridge’s intensity. At the back of the hotel’s lobby, beyond the high-backed, jute-covered chairs, Choi oversees Pot, as clever a consideration of Korean food by a native son as you’re likely to encounter. Come in for a bubbling hot pot packed with sardines, tofu, and daikon, or explore dishes that approach the heritage obliquely. He powers his uni rice gratin with alternating currents of Japanese Kewpie mayo, sriracha, and yuzu, while the kimchi seems as if it’s being reflected in a fun house mirror: a large chilled bowl of pickled white napa cabbage ribs holding strong beneath a heap of slushy ice and a hit of 7-Up. The place is great.

Two stories up is Commissary. Though the Web site describes the restaurant as being produce-centric, there’s no shortage of animal protein. A quartet of glistening scallops flaunt themselves under delicately seared crusts. The fried egg is a total flavor bomb, its runny yolk and crisp white combining with Tabasco, some spicy house-made sauce, fried serrano chiles, and a smidge of the oil that the egg was cooked in. Kind of like Mom used to make. Choi tends to invest his restaurants with a little autobiography. A-Frame honors his boyhood days at the Redondo Beach Pier; Chego, his sentimentality for Chinatown. But Choi was also a hotel chef for a long period (over half a decade at the Beverly Hilton) before fame struck, and a nice part of Commissary is how for the first time he nods to his professional past. The deviled eggs are devoid of the usual congealed-by-cold firmness; you can actually taste the relish and mustard seed in the creamy yolks. Pristinely fresh, the shrimp cocktail comes with a sharp, tangy sauce that may leave you regretting all the other variations you’ve tried. A masterfully restrained Cobb salad, with its oven-roasted turkey, diced avocado, and pungent blue cheese, provides a fitting reminder of its pedigree: the Brown Derby, which sat across from the Ambassador Hotel a few blocks away.

Perhaps some of those dishes sound like they’re on the lam from the room service lineup, but they embody Choi’s don’t-sweat-it charm. What’s unclear, though, is the restaurant’s overall focus. If I had to compress it into an elevator pitch, I wouldn’t quite be able to do it. “Country club and backyard” is how a waiter described the mash-up to me above the house music’s backbeat. The confusion doesn’t stop there.

Choi’s deeply held belief in inclusiveness—he recently announced plans to start a fast-food chain with a low-priced assortment of chef-driven staples—seems contradicted by the dry “we have no room” that the host welcomed me with on a recent evening. The menu is a single sheet with drawings of the items, which are arranged by price point into quadrants. In a header Choi instructs diners not to “freak out. Trust the pictures. And choose your own adventure. This is the experience. Point and build.” That might work at a one-bowl strip mall joint, but the format only sows doubt here. What’s an appetizer, a main course, a satellite dish? The kitchen also seems to think this approach frees it from having to lend the meal cohesion. Having secured my hash browns and braised broccolini, what I want to see the waiter arrive with next is not a chilled shrimp cocktail. The “adventure” I want to have with this Belle Pente pinot noir involves a steak.

It’s a good cut, too—a rib eye, carved thin but not so thin that it might be an allusion to Korean BBQ. The charred exterior gets a little diner-ish punch from the A1 mingling with a lustrous brown sauce. That’s one of five sauces winding through the menu, each contributing a different shading to the preparations they’re served with. That brown version on the steak adds a meaty heft to the pan-seared bok choy. The yellow sauce, a sly soubise of onions boosted with soy, harmonizes with the schmear of Dijon beside a crisp, golden schnitzel. It also rounds out the grilled corncobs sprinkled with parmesan and kochukaru powder and brings the perkiness of a vinaigrette to scored radicchio leaves and peaches. I like the green sauce just as much. The most garlicky of the bunch, it delivers a pleasing jolt to a stack of roasted top-on carrots. Yeah, I wish it didn’t reappear drizzled over a serving of raw radishes and a plate of grilled asparagus, but when Choi enhances its verdant tint with a hint of garlic butter, it renders a platter of tender broccoli florets almost illegally good.

Inevitably, with Choi the cooking comes back to richness; it’s as much a key part of his style as the multiclause sentence was for Henry James. Does the bowl of clams in a thick-as-chowder broth that’s been packed with garlic and crisp bacon need a barge of buttery herb-crusted garlic bread riding alongside? Perhaps not, but with effect building on effect, I won’t question the wisdom of this luxuriant rendition of Manilas. Ironically, when the taste for lushness is applied to simpler dishes, they can lose their vitality and become, well, kinda greasy. The burger is made with both beef and pork (so no red center in this patty); the cut side of the bun has been griddled in butter, and its dome has been brushed with more. I took a bite and thought I should pop a Coumadin right there. Instead of toasting the sourdough for the club sandwich, Choi appears to steep all three layers of bread in butter before browning them. It’s less than appealing to dig into the payload of mayo and bacon because there’s little to contrast with the turkey, tomato, and romaine when this puppy already relies so heavily on fat. Sagging with carbs but light on purpose, the thing neither gets you looking at the club sandwich in a new way nor seems to appreciate the logic of the original.

Of course, to even be talking about such a lunch counter standard in a restaurant offering an amber ’86 Schloss Schönborn riesling and a few remarkable vegetable creations like the chile-spiked Mexican corn does at least highlight Commisary’s reach. Does it represent a progression for Choi? The place is not really ambitious enough to qualify as that.

Despite the waiter’s talk of hyssop syrup accompanying the sole dessert, what arrives is just a disk of meringue floating on custard and crowned with diced poached rhubarb. The creation is fine—even a nice, bright ending—but more than anything it leaves you thinking about Choi and how adaptable he is to any situation. Commissary is open all day, seven days a week, and it needs a vaguely gastronomic-sounding dessert built of easily assembled parts. Such calculations don’t appear to impinge on anyone’s mood in the dining room. People seem happy just to be here, in the middle of the city, at a restaurant run by one of the more famous names in food right now. There’s something energizing about riding down the elevator with skinny-jeaned Europeans chattering on their phones and stepping into the buzz of Wilshire after eating at a Roy Choi restaurant, even if this one is not his best.

Kid Friendly? There are grilled cheese sandwiches and fries