Home Uncategorized Kuh & A: On the Cheese Trail in Vermont 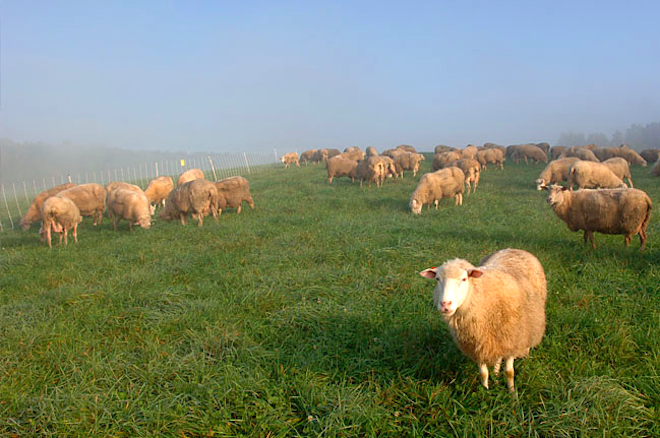 Does cheese have terroir?

“I’m tentatively, nervously working on a book about handcrafted foods in the U.S. Earlier this summer, while on vacation with my family in Vermont, I got to visit a cheese maker I’ve long admired: Vermont Shepherd, in Putney.

“They’re sheep’s milk cheese makers—you can taste their cheeses at nicer restaurants in L.A. and I’m sure La Brea Bakery and The Cheese Store of Beverly Hills carry their cheeses too. They’re pioneer sheep’s milk cheese makers in this country; virtually no one was making sheep’s milk cheese before them. This is Vermont, and it’s very much a countryside atmosphere at Vermont Shepherd. Hills, and a cloudy blue sky, and green pasture all around. You can smell the sheep miles away. We drive up and it’s about 2 o’clock in the afternoon and there are a bunch of sheep just standing around. Their faces are so expressive—is it the summer heat? And we see off in the distance a man with his shirt off and a straw hat driving a tractor through this large prairie. It’s David Major. He’s the cheese maker.

“We wave him over, and he drives the tractor right up to us and says ‘hi.’ I say, ‘I’ve enjoyed your cheese so much in L.A. that I couldn’t be this close to your farm and not stop in to have a look.’ He’s gracious, though he seems tired, and invites us in to the barn where they make the cheese. We go in and have a look at the milking, and then he takes us toward a thin road. At the end of the gravel, he’s built a mound of earth and it’s covered in vines and bramble, and there’s an old red door in the side of it—it’s the cheese cave. Major’s farm was one of the first in the country to age cheese in a cave. He takes us inside and it’s cool, and there are wheels and wheels of cheese. A thousand wheels. He shows us how they know when to turn the cheeses, and he shows us how the color of the mold changes depending on the season. “I’ve been thinking a lot about terroir these days, mostly because I think it’s overused. I don’t think people really understand what the word means. But this cheese cave swayed me. We couldn’t walk too far inside the cave because David explained that we’d be bringing in our own bacteria, which would throw off the aging. We had to wear little booties over our shoes, and we could only step just inside the door. After we walked out, he sprayed the entrance, where we were standing, with water to wash it out.

—as told to Daniela Galarza

From the Magazine: The Kuh Review