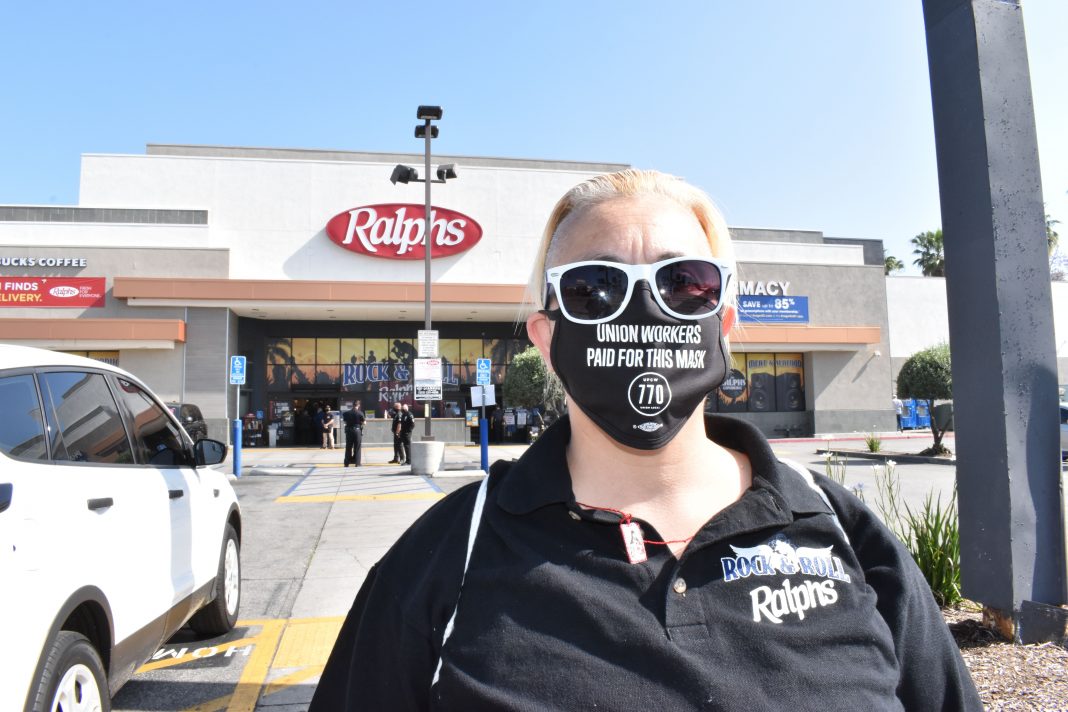 Grocery store workers take on significant risk of exposure to COVID-19 in the course of doing their jobs. Even with adoption of mask and distancing protocols, hundreds of grocery employees have contracted the virus, and dozens have died from it. Kroger, one of the nation’s biggest supermarket corporations and owner of the Ralphs and Food 4 Less chains, bought national television ads thanking workers and offered employees a $2 per hour ‘Hero Bonus’ for continuing to work during the pandemic. Now the company says that bonus will disappear on May 17, even as workers say requests for additional safety considerations go unanswered.

“The pandemic and its effects on the way people grocery shop and feed their families is not changing, so why is Kroger eliminating extra pay for workers they call heroes?” Julian Aguayo, a night crew stocker at Food 4 Less in Hollywood, said in a press release from UFCW Local 770, the labor union that represents grocery workers in Los Angeles, Ventura, Santa Barbra, and San Luis Obispo counties. “The essential role we play is not changing, why is our pay?”

The union reports that of its members—nearly half of whom are employed at Kroger-owned stores—nearly 200 have tested positive for COVID-19. A Ralphs location in Hollywood represents the largest publicly reported cluster of cases at a non-residential congregate setting in L.A. County, with 21 staff people at the store confirmed as positive so far.

“Grocery workers are on the front lines, but we are not be treated like we are essential. We are getting sick and it needs to stop,” stated Jackie Mayoral, an employee of the Hollywood Ralphs who became sick with COVID-19.

UFCW Local 770 and a group of affiliated unions representing grocery workers in other parts of the west have issued a joint statement to Kroger asking not only for the reinstatement of the Hero Bonus pay, but also for management to more effectively limit the number of customers allowed into the stores at one time, enforce physical distancing, and require all employees and customers to wear face masks in areas where that is not already mandated.

KTLA reports that Kroger has agreed to begin offering coronavirus testing for workers “based on symptoms and medical need” starting some time in May, and is offering emergency leave for some workers impacted by COVID-19, two things the union had advocated for in recent weeks.

Representatives for Ohio-based Kroger note that the Hero Bonus pay has already been extended–it was originally planned to be offered from just March 29 to April 18–and associates were given additional one-time bonuses of $150 or $300 on April 3.

“Our temporary ‘Hero Bonus’ is scheduled to end in mid-May. In the coming months, we know that our associates’ needs will continue to evolve and change as our country recovers,” reads a statement issued by Kroger. “Our commitment is that we will continue to listen and be responsive, empowering us to make decisions that advance the needs of our associates, customers, communities and business. We continuously evaluate employee compensation and benefits packages.”

The company tells Supermarket News that it is also working to install shields and distancing markers in stores, distribute face coverings, and is encouraging customers to opt for contactless payments when checking out in-store, and to use delivery, curbside, and ship-to-home services to reduce crowding at the markets.

Workers and their unions have been at odds with Kroger for a year, narrowly avoiding a large-scale strike in late 2019 over contract negotiations. At that time, employees expressed concern about low wages, inequity in compensation between job categories, and affordability of health care.

“The pandemic exposed how little corporations pay many workers, workers on whom the public deeply depends,” said John Grant, president of UFCW Local 770. “With all eyes on essential workers during the pandemic, grocery corporations were quick to capitalize on the good PR of raising wages, but they cannot justify taking them away, especially since they have continued to do business while so many other businesses are closed and their profits are record high.”

The debate over the safety and compensation of supermarket workers is part of what is emerging as one of the central narratives of this stage of the pandemic. As affluent professionals have transitioned effectively to working remotely, new COVID-19 cases are being seen disproportionately in those workers who are required to continue going to their workplaces–workers who are often lower wage and more likely to be immigrants and individuals of color. One recent study in San Francisco found that 90 percent of those who tested positive in the city’s densest neighborhood were individuals employed in ‘essential services’ sectors, including agriculture, restaurants, janitorial services, and grocery stores.

RELATED: Farm Workers Are Still in the Fields as the Pandemic Spreads