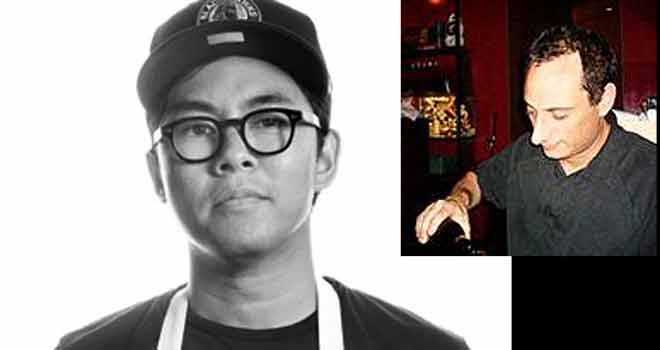 Aside from being a Los Angeles magazine 2012 Chef of the Year, an NYU film school grad, and a torchbearer for authentic regional Thai cusine, Kris Yenbamroong is a wine nerd. Yes, the guy who serves Chang beer towers at his West Hollywood restaurant Night + Market has, over the last year, acquired a cultish fascination with the more niche aspects of winemaking, thanks in part to his friendship with our own wine columnist Lou Amdur of Lou Winebar fame. Amdur, who is an expert in esoteric wines and obscure winemaking methods, is now teaming with Yenbamroong for a $65, seven-course wine pairing dinner featuring Isan and Chaing-Rai-style dishes on Sunday, January 20.

“We’ve been getting together fairly often to eat, drink and geek out over stuff,” says Yenbamroong. “One of the conversations we keep going back to is the notion of ‘lost’ traditions and how a lot of the things we love are in a fragile state of existence due to lack of interest. … This is not a lecture and is not intended to become Gospel of pairing wine with Thai food. It’s a chance for us all to get together, geek out and celebrate all things LOST.”

The full menu is below, as well as an excerpt from a fascinating dialogue between Amdur and Yenbamroong in which they discuss Thai food, wine, and Lou’s methodology in choosing his pairings. It’s a lengthy but worthy read, touching on the ideas of capsaicin, fermentation, and Thailand’s relatively scant wine tradition and how those factored in to Amdur’s selections. So basically, we’re geeking out, too.

Kanom Jin Nam Ya Pla Raa: curry of wild ginger and pulverized mudfish of both the fresh and fermented varieties

Lou: Many things in our lives that feel the most concrete can slip away through our fingertips and fall into the Heraclitean stream. Our hometown, if we leave it, changes inexorably in ways that make it no longer our town. You cannot go home again, and yet that does not stop you from trying. The foodways of one’s own people can feel like they are a part of the natural world: banal and eternal, but they are, in reality, ephemeral. The sour Jew rye bread I ate as a kid, with a thick, bubbled and shiny crust and also bagels—don’t get me started about the twilight of the bagel—the people who made a living baking these traditional breads are mostly gone, if not the tacit knowledge that they knew with their fingertips. So I dig that you are capturing foodways of your people, some of which are on the verge of slipping away. You told me that the kao kan chin you are cooking, a dish of jasmine rice cooked in pig blood dish, was ubiquitous in the far north of Thailand when your mom ate it as a kid, but today it is nearly lost. Yet you do not make a hypostatic fetish out of it—you make this rice dish a three-dimensional living thing by using pork jowl rather than simply plain old pork fat. There are wine growers, too, who are engaged with capturing and preserving some of the old ways, and I thought that drinking a few of these wines with your food might open up a passageway way to lost worlds.

Kris: That dish was a revelation for me. Honestly, I’d never heard of it until my mom mentioned it last year and I sought it out. That’s how a lot of these traditions get lost. The older generations often assume that the younger generations aren’t interested in these things. A lot of times, it’s true. But for me, it’s gold. When we talk about ‘upcountry food’ or ‘soul food,’ that’s what kao gan chin is, in the extreme sense. It’s rustic and it’s made from what’s readily available but it’s not just an issue of subsistence. It’s about transcending–making something delicious out of modest ingredients. That’s a common thread in the countryside, though I’d say that the sensibility of the North is a sort of earthy elegance while in the Northeast, things are more direct. There is no elegance. The flavors are crass, in the best sense of the word.

We’ve talked before about how there’s no real framework for discussing wine with Thai food, in large part because Thailand has no wine tradition. So while there is the more concrete concern of which wines taste good with the food, it’s also interesting to approach this from a thematic place as we’re doing here. Kao Gan Chin is good example of a dish whose very existence is a fragile one. The sole purveyor I found had actually moved on to hawking iced lattes. It was a shophouse around the corner from the house my mom grew up in. The son made big money with the coffee while his mother, probably in her 80s, had a steamer set up out front with these little banana leaf pouches which contain the rice. I’m guessing she sells less than two dozen daily. These are the traditions that are fading quickly because they see little to no demand. Bloody rice will never be as economically viable as iced coffee.

Lou: You use some funky, fermented flavors, and in some dishes, an unrestrained hand with chilies. Funky is not that hard to drink wine with (think stinky Epoisses or Taleggio cheeses). Capsaicin, though…the received wisdom is that you’ve got to have residual sugar to “stand up” to the heat. Ugh, I fucking hate the notion of standing up to something in food. If you find spicy food a sort of gustatory rollercoaster, “whoa, this is exhilarating…oh no, oh no, I’m about to fly off the rails…help, I’m burning up and may very well expire!” just do not order it! Of course, a fruity-style wine Mosel Riesling can certainly work with heat, but you end up attenuating its ferocity, which is probably not apposite. Thailand is not a country with a tradition of grape wine drinking, and because the food you cook has such a multiplicity of stimulating flavors going on all at the same time, I think that simple and honest wines probably work best. I see you have not a few gamay-based wines on your wine list, from the Loire and of course, Beaujolais, and that makes sense: it’s fantastic how cru Beaujolais can be both the consummate gluggy wine, and also, if you care to listen to it, profound stuff. With your kao kan chin, for example, I think Spätrot Gebeshuber’s “Klassik” makes a considerate pairing. It is a wine from a small, organic grower in lower Austria, and it is made from two traditional grapes that have become, in modern times, nearly lost (the Austrians grow only a tiny bit of each today, together totaling about .04 percent of the white grapes grown in the country). Your dish, rich with pork blood and jowl, has a dynamic tension between unctuousness, capsaicin-tanginess, and sour. The Spätrot Gebeshuber itself has a bit of tension—it is a little luscious, but the texture is riven with a moderate amount of acidity. I would think that a wine brimming with acidity, a high-tension grüner veltliner, for example,               would not be a good fit—acidity plus capsaicin, unless it is buffered by residual sugar, ends up amplifying the heat of chilies, and can unbalance the dish. If you add residual sugar to the equation, you get sweet-and-sour, which I do not think the effect you’re aiming for.

Kris: I think I may be slightly more optimistic than you when it comes to the potential for pairing wine with my food. Perhaps that’s because my standards are lower. While it’s true that there is historically no wine tradition in Thailand, there is a tradition of chugging alcohol while feasting. That’s how I approach wine pairing. Since I could drink a cold soda, mekong whiskey (though technically rum) on ice, any number of Gamays, Budweiser or pet-nat with my food and be happy, I’ve concluded that there is no ‘correct.’ Although I will admit that the common thread with these beverages is that they are for the most part ‘simple’, which is something you talk about. They are not trying to compete, or to elevate. They are just ‘there.’ What excites me is the idea that for this supper we’re doing, you’ll come up with a handful of wines that you find feel are appropriate. Then if we do this a few months from now, you might have wildly different selections. I’m okay with treating this as a process or an exploration, rather than a mission to find a single truth about ‘wine and Thai food.’ Talking to you, I’ve also started getting the sense that my food tastes different to me than it does to you. We both taste sour, sweet, salty, hot, bitter, herbal, etc…but the balance of those flavors, the way in which they come together, is something that’s burned into my psyche and my taste buds. What I’m getting at is that we react differently when faced with something familiar than we do with something foreign.