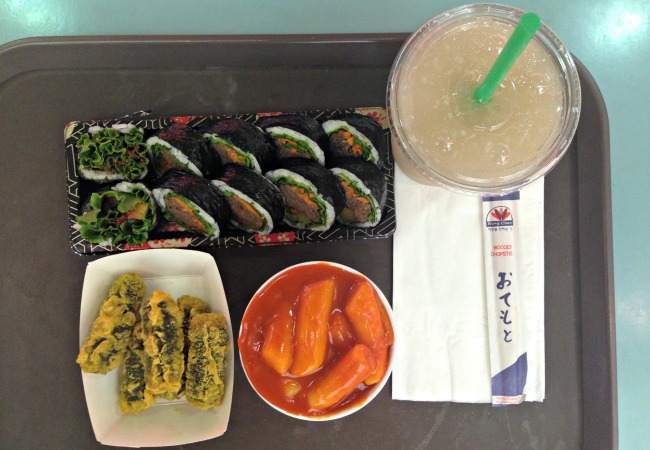 The basement food court of Koreatown Plaza, like most mall food courts, isn’t exactly the hippest spot in town these days. At many of the kiosks—which generally specialize in one or two menu items, like hot stone bibimbap, two-fisted dumplings, breaded pork tonkatsu or bubbling tofu soondubu—the clientele tends to favor the older generation.

But at the newest storefront, Awoolin Kimbap & Taco Factory, you may notice many more younger Koreans than older, and even more shockingly, a rather long line of them waiting to order.

Awoolin is vaguely modeled after a pojangmacha, a kind of alcohol-friendly street food stall common to the busy sidewalks of South Korea. At Awoolim, they specialize in street-friendly items like kimbap (fat sushi rolls without the raw fish), tteokbokki (chewy rice cylinders swimming in spicy sauce), various fried things on skewers, and, in a gesture of modern fusion, the bulgogi taco. Although the kimbap and fried squid and tteokbokki are pretty good at Awoolim—a chain who also has locations inside Korean grocery stores in Diamond Bar and Norwalk—everyone in line here seems to be leaving with something you can only get at their Koreatown branch: The Sikhye Slushie.

As a beverage concept, the Sikhye Slushie ($2 for small; $3 for large) is pretty ingenious. The traditional Korean dessert drink sikhye, made from bits of sweetened cooked rice and thickened with barley powder, is tossed into a slushie machine like the kind you see at 7-11. The resulting drink is hard to define—malty, just-sweet, icy, and most of all, immensely refreshing. The cashier boasted that it was their biggest selling item. Did they invent it, we asked? She couldn’t say.

Nevertheless, in the throes of an opressive heat wave, it provides much needed relief. That alone may explain why the youth of K-town are going nuts for it, and why you’ll likely see it on café menu’s across Koreatown in the near future. Whatever the reason, we’re thirsty for another.