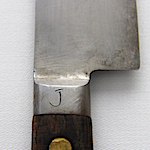 Dizzy Gillespie had the trumpet. Dalí had the paintbrush. For every chef, the knife is more than just a tool—it’s the extention of themselves that creates the dishes we love to oogle, instagram, and eat. Knife Rack is all about the skills and stories behind a chef’s knives.

Josiah Citrin is one of this city’s most beloved chefs. His Santa Monica restaurant, Mélisse, has won nearly every award a restaurant can win—including two Michelin stars, and the top spot in Zagat Los Angeles. Citrin’s talent and career tragectory (he spent years with Wolfgang Puck at Chinois, and has studied all over France and Japan) speak for themselves. Here’s a close look at his most beloved knives.

E. Dehillerin long slicing knife: A long sigh emerges from Citrin’s grin when he speaks of this knife, his oldest. “I bought this knife in 1987 when I was working as a stagiaire at Montevideo in the 16th arrondissement. There was a dish there that they put me in charge of, a marinated salmon dish, and it had to be sliced very thinly, so I bought this knife. I got really good at slicing that salmon.”

Boning knife: After living and working in France for several years, Citrin returned to the states in 1991. That’s when he landed a job at Wolfgang Puck’s Chinois on Main, then a hot bed for fusion cuisine. “Duck was—and is—a popular dish there, and I used this knife to filet and cut up the duck. Before and after it was roasted. I probably cut at least 1,000 ducks at Chinois with this knife.”

Gift from Kazuto Matsusaka, lobster knife:  “Lobster was a big dish at Chinois at the time and I used to use this knife on the lobsters. It was a gift from (then chef) Kazuto. I had to slice them in half while they were still alive, and then immediately put them into the pot. Check out the wear on this knife, where the curve on its blade is completely gone. I’d say I cut up at least 2,500 lobsters in the time I worked at Chinois.”

Japanese sushi knife, gifted to Chef de Cuisine Ken Takayama: “I bought this knife for Ken when I was in Japan in 2010. I only had a certain amount of cash and Nenox, the knife shop, wasn’t taking my credit card. It was a thousand dollar knife, maybe, but I only had $600. And eventually the guy let me have it at the discounted price. We keep this knife in the kitchen, so that’s why it’s all banged up. Someone broke the tip. It’s a sushi knife, but you can use it for almost anything.”

Custom handle, Western-style Japanese made chef’s knife: “I bought a bunch of knives when I was in Japan in 2010. What I like about this one, also from Nenox, is the curved handle. That’s custom made. And these Western-style knives made in Japan have the best of both worlds: they’re really well-made, and the steel is great, but they’re lighter and more balanced too. I use this for everything, and take it when I go to food events and I have to cook. It’s easy to use and easy to clean.”

Custom, personalized Damascus steel truffle knife: This year, the Western Australian Truffle Association gifted this knife to me after the last Truffle Kerfuffle (a truffle event that they host). It’s a hand forged knife made of this beautiful steel. I use it when I get truffles in—I always, always taste truffles before I buy them. We’re just starting to get white truffles in now.”