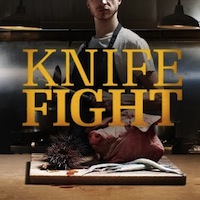 The Esquire Network’s raw cooking show competition Knife Fight is back for a second season on Tuesday, April 15. Host chef Ilan Hall of downtown’s The Gorbals has gone bigger and badder for the new season by bringing in more chefs from around the country and adding in a dose of celebrity along with this season’s food-loving judges.

In the first episode, two chefs from outside of L.A. battle it out in The Gorbal’s kitchen while a live audience stands on the other side of the hot line. Chef Tim Love is based in Texas where he owns several restaurants in the Fort Worth-area. Love goes up against D.C.-based chef Mike Isabella, whom Hall knows from his days on Top Chef. The first episode’s secret ingredient is an animal that, when alive, goes “oink.” Watch the teaser trailer, above.