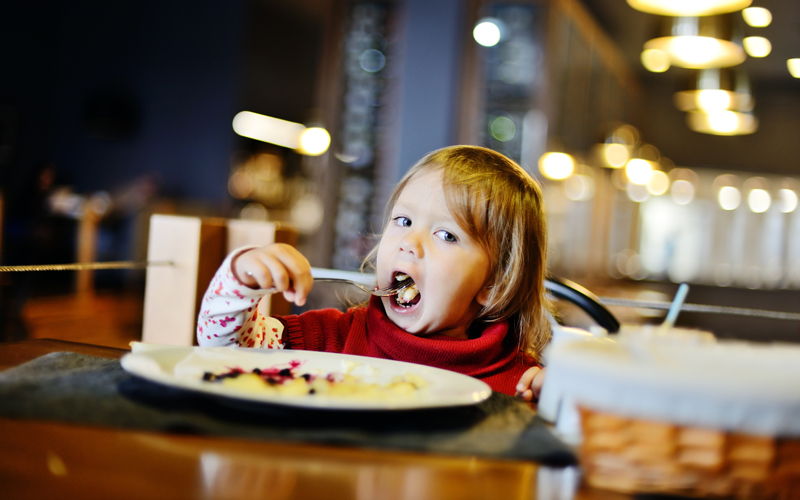 My most humiliating dining experience occurred when I was four. I perused the menu at the Playboy Club, ordered a chocolate “mouse,” and suffered the derisive laughter of my parents and a woman in a bunny costume. That harrowing incident only served to make me stronger, forcing me to familiarize myself with classic dishes and the fact that adults have an aversion to desserts shaped like rodents.

So today I endure children—even my own—dining around me. I know they, too, must learn their painful culinary lessons in real life, not merely on Master Chef Junior. But child-centered parenting should not mean child-centered dining. The young have a right to be as intolerable as we are.

For this reason I normally frown on children’s menus, where animals have unappetizing body parts reminiscent of a chicken bordello: fingers, strips, nuggets. But some restaurants are now creating smarter versions. ROKU offers a teppanyaki Okosama, like an enlightened Japanese “Happy Meal” that mixes culinary risk-taking with actual risk-taking. The experience allowed my seven-year-old to choose between an organic Jidori chicken breast and Faroe Island salmon while watching a chef shoot lasers into an “onion volcano.” And I can admire that Au Fudge, a kid-focused restaurant co-owned by actress Jessica Biel, tries to elevate its grilled cheese sticks with truffle oil and has a children’s book called The Story of Au Fudge, featuring a unicorn named Creme Brulee.

RELATED: Jessica Biel’s Au Fudge Is Chuck E. Cheese for the One Percent

But, as I’m sure the instructor of Au Fudge’s Toddler French Music Class would agree, it is even better to expose children to the real thing. So I’ve had my son don a blazer to dine at Paley and at Otium, and he’s been welcomed at Odys + Penelope, which offers an off-menu pappardelle with butter and Parmesan. Chef Quinn Hatfield says he likes when families come, though he doesn’t take his two children to fine-dining spots. “I’m not going to be that guy,” he says. “But you can be that guy.” I shall indeed be that guy. Because learning to appreciate food is as important as studying music, art, literature, and, some might argue, math. If that means we must all drink another glass to cope with having children around, it’s a small price to pay.