Home Uncategorized Kale the Conqueror: How One Mean Green Took Over the Food World 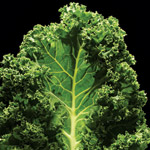 It is the unlikeliest of “It” ingredients. But we wouldn’t be surprised to open a tabloid rag tomorrow and see a few taut fronds pictured next to Adam Levine pumping gas. Kale, a hardy winter green in the mustard family, has grown beyond its slow-cooked Southern roots to become a culinary and dietary sensation. From the flat-leaved black Tuscan variety, cavolo nero, to the purple-stemmed red Russian, kale is adding color and meaty texture to pies at Stella Rossa Pizza Bar, Caesar salads at Mess Hall, and everything in between.

“It doesn’t even make it to the market table,” says Barbara Spencer of Windrose Farm, whose baby kales get scooped up by restaurants before most shoppers can score a bunch. The frenzy is partly about health—kale is essentially a multivitamin in plant form—and partly the result of chefs who have been pushing greens for decades. “When we opened A.O.C., we had kale as a side and still do,” says chef Suzanne Goin. “No one knew what it was, but when you got people to try it, they really fell for it.”

Next time you’re roasting kale chips for the kids’ lunch box, tell them that until recently it was tough to even find seeds. “But cavolo nero was such a regular thing in Italy,” says chef Evan Kleiman, who brought seeds back from Tuscany 20 years ago and gave them to Carpinteria’s Coleman Family Farm to plant.

Just as kale fever is peaking, however, the haute vegetable is under attack. The aggressive Bagrada bug, native to parts of Africa, Europe, and Southeast Asia, is threatening local crops. “We’ve lost 100 percent of our kale this year,” says Bill Coleman, who now refers chefs to Paso Robles-based Windrose, where cooler temperatures have thus far kept the insect at bay.

“The bugs slow down in winter,” says Coleman’s son, Romeo, who hopes he’ll eke out a few harvests before spring. But with demand at an all-time high, we could be on the verge of a kale crisis. At least we’ll always have quinoa.

1. Kale salad with apples, dates, and sheep’s cheese at the Hart and the Hunter

In Need of Space for Outdoor Dining, These Local Restaurants Got Creative