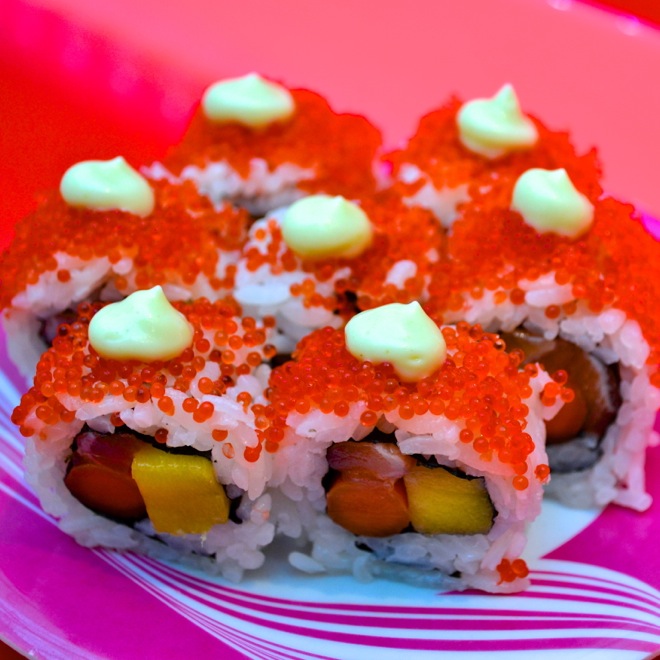 Without a doubt we all know people whose lives revolve around food. And of those foodies, there are probably more than a few whose lives revolve specifically around sushi. Out of that set of gourmands, there is probably a niche-y niche that goes loopy for kaiten zushi aka conveyor belt sushi. This mode of sushi service involves an automated conveyor belt that snakes around the entirety of the restaurant carrying with it a multitude of maki, nigiri, and sashimi along with edamame and seaweed salads. The purposes of kaiten are customer convenience and staff efficiency. Also, it’s pretty cool to watch.

Parked next to a Sears and strategically at the landing of a set of escalators, Wasabi Modern Japanese Cuisine is an open-air sit down sushi restaurant inside the Westfield Topanga Shopping Mall. Using mostly organic ingredients, this dayglow-tinted eatery has a conveyor belt system that transports color-coded plates that tell diners how much each item costs. The price points are fantastically reasonable with most items costing between $2.50 and $5.00. A see-through lid lets you see what you’re getting while keeping it all fresh and sanitary.

Coiled up like a blooming pink rose, the yellowtail sashimi was slightly sweet, undoubtedly very fresh, and felt velvety and buttery in my mouth. The yellowtail was only $4.00, cheaper than any supermarket sashimi I’ve found, and far superior in quality. Avoid the shrimp dumpling appetizer, though. That one tastes very much like it’s from the freezer section.

The Lucky Roll—so named because it’s cut into seven (lucky) pieces versus the usual six—is lined with sushi-meshi (vinagared rice) and filled with colorful pegs of fresh salmon, mango, and yamagobo (burdock root). Speckled all over the top are ruby red tobiko (flying fish roe). One bite and you get pop, chewy, crunch, and creamy all at once. The unified flavors of a gently sweet-savory salmon, tropically dulcet mango, and sour-spicy ginger root was equally as satisfying as the roll’s combined textures.

Wasabi’s kaiten sushi service in a mall seems to be a perfect fit: a quick bite and a break from shopping, an excellent alternative to pre-packaged sushi at a great value, and, last but not least, the simple(ton) amusement of staring at things go around and around and around and…

Ever wonder what it would feel like to be on one of those conveyors? Uncle Eddie’s got ya covered: