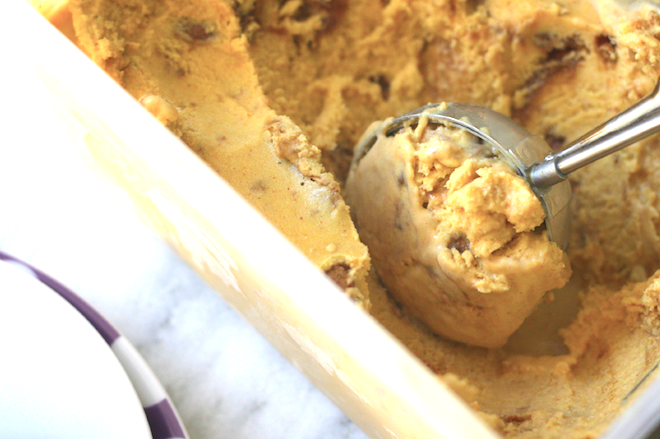 Quenelle, the ice cream store that’s been tickling adventurous palates with sophisticated cones, popsicles, and pastries since opening in Burbank this past summer, will be scooping a special holiday flavor—bourbon eggnog—beginning this week. John Park, whose résumé includes stints as a pastry chef at Lukshon and Providence, is behind the cash-only takeout storefront. Every creamy one-gallon batch of ice cream and sorbet is prepared by hand in the small kitchen located just behind the check-out counter. The shop’s footprint may be petite, but Park’s ice cream makes up for it with big, bold flavors.

Working with chefs like Sang Yoon, Michael Cimarusti, Jason Trevi, David LeFevre, and Jordan Kahn inspired many of Park’s cool combos. Hibiscus lemonade, kaffir lime Greek yogurt, and vanilla mascarpone satisfy those who prefer their treats in a cup or cone, while yuzu mojito, blackberry lychee, and peach Arnold Palmer serve those who like them on a stick. The kecap mansi (a sweet soy sauce common in Thai and Vietnamese cooking) ice cream has been popular in recent weeks, Park says, but the perennial customer favorite is the blueberry pie ice cream, into which he folds fresh fruit filling and a crumbly crust. Our advice is to sample each of the (usually 16) intriguing selections. And do pop by this week for a quenelle (the pretty oval-shaped scoop that’s the shop’s namesake) of the creamy bourbon eggnog.

Park is also a fine baker, so consider picking up some of his lemon shortbread or blond chocolate hazelnut cookies. Santa will be grateful.