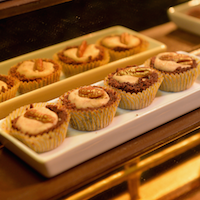 You know all of those scenes in Wolf of Wall Street where everyone gets completely wasted? The same thing happened on Sunday night at the 71st Annual Golden Globes’ after party hosted by The Weinstein Company and Netflix. Held in a clear plastic bubble tent, hundreds of famous faces poured through glass doors to sip on Moët & Chandon champagne, Fiji water, and DeLeon tequila. Diddy presided over the event with Bono and (a charmingly tipsy) Julia Roberts at his side.

Bryan Cranston did not bring blue meth to celebrate his big win. Kevin Spacey likes his cocktails neat. Robin Wright sipped champagne out of a mini bottle. Diddy danced with a bottle of DeLeon. Producers, directors, actors, and their publicists, assistants, and stylists took turns at the DJ booth and on the dance floor. The smell of freshly smoked weed permeated throughout the space as the crowd grew. By the time they’d let in the stragglers at 11:30, most of the big names had left to party at West Hollywood hot spots like SoHo House, the soft-opened 1Oak, and Bootsy Bellows.

Caffe Luxxe provided coffee drinks; sbe served food from The Bazaar by José Andrés, Cleo, and Katsuya. Celebrities, who had already eaten during the show, didn’t touch the spherified olives or sushi, though a few were spotted nibbling on desserts by Brownie Brittle creator Sheila G, including mini cheesecakes baked in a crust made from the crispy chocolate treat.

Golden Globes Grub: What the Stars Will Be Eating on Awards Night