Home Uncategorized José Andrés Teaches Us How to Cook Lung, Liver, and Tongue 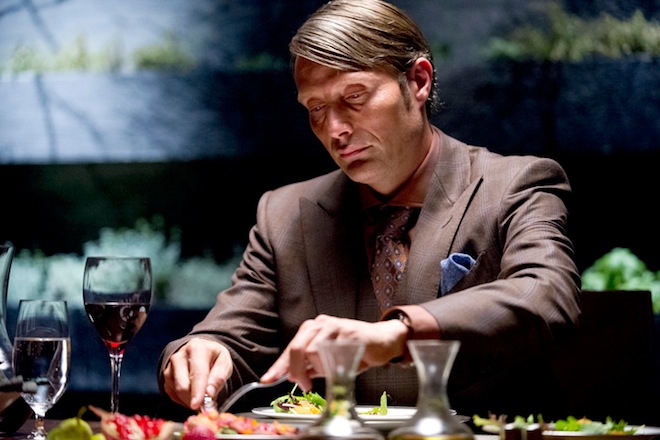 TV Guide’s Sadie Gennis calls NBC’s Hannibal “the most appetizing scripted show on television,” a statement that sounds like sarcasm, given the subject matter. All of the show’s culinary scenes involve (fake) human meat that has been carefully styled by Janice Poon. But since creator Bryan Fuller hired Chef José Andrés (of L.A.’s The Bazaar By José Andrés) to be the show’s culinary consultant, we’re going to have to get behind Gennis.

Turns out, Andrés was more than just a consultant. Fuller tells TV Guide: “I had seen [Andrés] talk about food and how passionate he was and articulate he was … and he had such an enthusiasm that I thought Hannibal Lecter should have a similar passion for food.” Andrés has also supplied props to the show, including a signed copy of Escoffier which appears in episode 4. In that episode, a scene about foie gras (human or fowl) was suggested by Andrés because it both demonstrates Hannibal as a food-intellectual, and because it mimics our modern day discussions about the humanity or inhumanity of eating meat.

Viewers are constantly challenged by this serial killer. His character is grounded in the fact that he doesn’t see himself as a cannibal. Fuller explains: “He sees himself as consuming cattle, or cattle-grade people.” And this is part of what makes him so fascinating for us to watch. As Gennis points out, we’re trying to reconcile the “complicated dichotomy between the mouth-watering aesthetics of Hannibal’s dishes and the grisly knowledge of what they are.” Fuller comments on the issue as well, noting that “there’s something fascinating [about] introducing a very confusing, yet tantalizing element to cooking where you are what you eat. Quite literally sometimes.”

In episode one, Hannibal cooks human lung in a scene that’s both appetizing and ghoulish. Not coincidentally, lung would be Andrés’ first choice if he were ever in a position to cannibalize. He tells TV Guide that he would prefer the lungs of a smoker (clearly, a choice based solely on taste and not on its health effects). “We’re looking at a human being as a bioorganic crock pot that is smoking itself for our dining pleasure,” explained Fuller. “It felt like it checked off all the boxes of Hannibal Lecter: [Smoking is] a rude habit and there’s also an added benefit of that rude habit providing a unique smokey flavor for the tissue.”

Mmmm, barbecue for dinner, anyone?