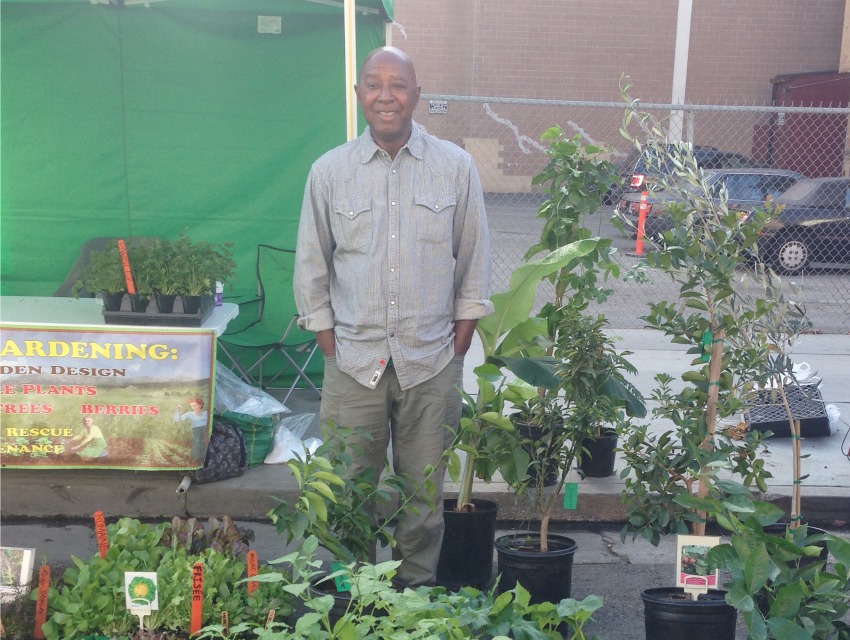 Jimmy Williams did not intend to move to California. The fashion designer turned gardener was designing knitwear for Calvin Klein in New York when he came to Los Angeles to get married in the early 1980’s.

“I was supposed to go back because an Italian knitwear company wanted me to come to Italy and do a knitwear line in Italy,” he remembers, but a sweet deal from Cole of California lured him to stay. “They asked me to design the sportswear line for Anne Cole here…they said,. I can get you a new car, I can get you a bonus…so I wound up staying here because of that and I’ve been here ever since.”

In L.A. edible gardening circles, Jimmy is known as the gardener to the stars (Jennifer Garner and Ben Affleck are just two of his many high-profile clients). In the process of building their company, Logan’s Gardens, Jimmy and his son Logan have become celebrities in their own right. The father-son duo no longer take on new clients, but they do sell their fruit and vegetable starts and fertilizer mix at the Wednesday Santa Monica and Sunday Hollywood farmers’ markets, and in addition to plants, they sell worms and worm tea out of their Silver Lake nursery by appointment only.

Jimmy grew up gardening in Southampton where he and his seven brothers and five sisters were raised by their grandmother. He remembers, “We had a huge garden…there was plenty of food. What one person didn’t grow another one had, and a lot of time you’d get it for free because you were a neighbor. It was that kind of thing.” Unlike most of his siblings, Jimmy loved digging in the dirt and continued to garden even after his fashion career blossomed in New York City.

“The first garden I did in Manhattan was on a rooftop for a friend of mine,” he says. “She had a huge rooftop and she wanted to grow all of her flowers and veggies, she even had her composter. She lived on Broadway on the Westside. So I would get on the cross town bus with one of those shopping cart things with a big plastic bag and I’d go to Central Park and I’d gather all the leaves and all the grass I could gather and I’d put it in the worm bin. And that was our compost from Central Park,” he says laughing. That was nearly forty years ago.

To hear Jimmy tell the story, it’s as though his success is one surprise after another. When he settled in LA, he ripped up his parking pad to install raised beds in the backyard of his Larchmont house. His neighbors were eager to learn about the man who was smashing up concrete with a sledgehammer next door, and soon they requested their own raised beds and recommended Jimmy to their friends across town. Carless, Jimmy would take the bus to gigs in Venice and Laurel Canyon. Eventually, a client traded him life coaching for garden maintenance, and while he was skeptical, Jimmy took her up on the offer. “Of course I didn’t even know what life coaching was,” he recalls. “I thought it was just a therapist. But she was very instrumental in me being organized.” Pretty soon he had a car, more clients and a six page spread in the Los Angeles Times Magazine.

I asked Jimmy what it’s like to be part of a movement that has gone from grandma to hipster-chic in under a decade. He says he just laughs at it. “Nowadays they put all these labels like permaculture and whatnot on things – people were layering with cardboard and grass and hay and all this years ago.” He goes on to tell me that 80% of gardening is soil. “It’s all about what goes on underground. I call it the poop cycle. The biggest concentration of microbes and beneficial bacteria is in the tunnel of an earthworm….so what does that tell you? Just make sure the environment is perfect for earthworms. Every shovel full should have 10-12 earthworms. And when you use chemical fertilizers you lose all of it.”

What’s his favorite part about gardening now? “Working with my son, Logan,” he says. “I’m lucky.”

Where to find Logan’s Gardens: Jimmy and Logan sell plants and fertilizer mix at the Wednesday Downtown Santa Monica and Sunday Hollywood Farmers’ Markets. Plus, you can make an appointment to visit the Silver Lake Nursery where Jimmy and Logan also sell worms and worm tea (no website, phone only 323-216-0379). Or, pick up Jimmy’s book From Seed to Skillet: A Guide to Growing, Tending, Harvesting, and Cooking Up Fresh, Healthy Food to Share with People You Love.