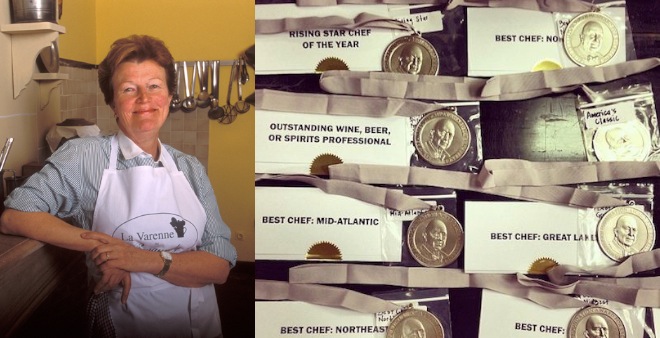 The James Beard Awards—sometimes known as the Oscars of the food world—finished doling out medals last night in New York. The awards now take place over the span of a long weekend, with media and publishing awards on one night and then, after much partying and suspense, restaurant and chef awards a day or two later.

Last night’s ceremony was held at Lincoln Center’s Avery Fisher Hall and was hosted by actor Oliver Platt (New York magazine restaurant critic Adam Platt’s brother). Naturally, we were rooting for our own dine editor, Lesley Bargar Suter, and restaurant critic, Patric Kuh, who were both up for awards. They lost tastefully and gracefully to editor Adina Steiman of Men’s Health and critic Tejal Rao of the Village Voice.

The Digest blog wasn’t up for an award, but we’re openly raising our eyebrows at the group food blog win. The medal went to the Whole Foods’ produced site Dark Rye. While visually stimulating and full of interesting content, Dark Rye doesn’t appear to be a blog. It looks a lot more like a digital magazine both in the length of its editorial and the way its images are presented. The LA Weekly also questioned the choice, and brought up a good point: “Perhaps those distinctions (magazine/retail-sponsored content? Magazine/blog?) are falling by the wayside?”

But what really has the Los Angeles food world frowning is that the few local restaurateurs and chefs who were up for awards lost to their colleagues in San Francisco, Chicago, and New York. Though they’ve won awards in the past, Suzanne Goin, Caroline Styne, and Nancy Silverton were passed over this year in their respective national awards categories. Also passed over were Piero Selvaggio (Valentino, Outstanding restaurateur) and Jon Shook and Vinny Dotolo (Son of a Gun, Animal, Best Chef, West). Los Angeles Times‘ restaurant critic S. Irene Virbila called it “Brutal.”

I love the James Beard Foundation and all that it stands for and supports, but I have to wonder, year after year, if they spend any time dining out in Los Angeles at all. Why is L.A. grouped into a general “West” category, encompassing all of California, Nevada and Hawaii, when New York City gets its own category? We can talk about population or restaurants per capita, but at the end of the day, it feels like L.A. has been put in a box so that a New York food institution doesn’t have to worry too much about it. I believe that it is because of this categorization, the diversity, culinary talent, and growing dining power of Los Angeles has recently not been fully acknowledged by the Beard Foundation.

Finally, a big congratulations must go to Anne Willan, who this year was inducted into the Cookbook Hall of Fame. The Santa Monica resident, culinary instructor, and cookbook author continues to publish books of historical and culinary relevance every few years, including last year’s The Cookbook Library: Four Centuries of the Cooks, Writers, and Recipes That Made the Modern Cookbook.

The James Beard Foundation: complete list of nominees and winners, 2013