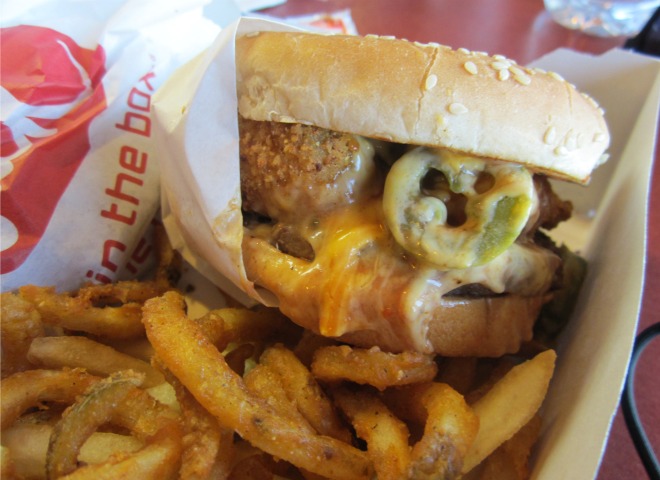 Last September, Jack in the Box revealed something that would alter the fast food landscape forever.

It was called the Munchie Meal menu and it would be offered nightly—from 9 p.m. to 5 a.m.— and would comprise of $6 cardboard boxes pre-loaded with two tacos, half-french fries, half-curly fries, a drink and one of several marquee entrées (to use that term loosely) that included things like chicken nuggets “drowning” in cheese, ranch and bacon; a cheeseburger with a grilled cheese sandwich for a bun; a hash brown-topped croissant breakfast burger; and a breaded chicken sandwich topped with mozzarella sticks and white cheese sauce.

When the menu was announced, it was immediately pointed to as an example of the mainstreaming of modern stoner culture. I mean, who else but a bunch of high-as-kites Millenials would be seeking out bacon-ranch-cheese nuggets late at night?

As it turns out, a lot of people.The Munchie Meal has proved one of Jack in the Box’s most successful campaigns to date, which might say more about the late-night diets of regular Americans more than it does about the purchasing power of the stoner set.

The fast food chain is so enthusiastic about the summer debut of its brand new addition to its Munchie Meal menu that it held an exclusive media tasting last night in Hollywood, complete with velvet ropes and jalapeño plant decorations (sadly, Jack himself was not in attendance).  Their newest after-hours star, the “Hella-peño Burger,” is a winking riff on the slang NorCal adjective that has reached ubiquity amongst certain Cali bros. If nothing else, J-in-the-B knows their target demographic.

Interestingly enough, the burger represents a combination two current fast food trends by being part of exclusive menu available only during certain times of the day (like Taco Bell’s breakfast menu) and by combining pre-existing ingredients into something new and shiny (pretty much every Subway special item ever).

The jalapeño-centric creation tasted more or less what you’d imagine it to, with all its ingredients squashed together onto a bun that could barely contain all the salty-spicy-fatty flavors.

I will say that it was far superior to the only other Munchie Meal item I have tried, the “Exploding Cheesy Chicken Sandwich,” which I once ordered on the ride home from a bar-crawl with friends. That bland, textureless heap might have been the only fast food burger I have ever not finished while inebriated. Of course, I didn’t finish the Hella-peño burger either, but this was at 6 p.m. on a (sober) weekday, and I wanted to maintain some scrap of self-respect. If it was 2 a.m. on a particularly turnt-up Saturday, there probably wouldn’t have been a single bite remaining. I imagine that’s exactly what Jack is aiming for.

The Hella-peño burger launches tomorrow and will be available at Jack in the Box locations through the summer.