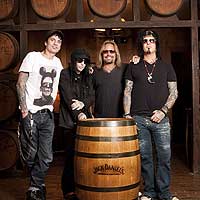 Share
Email
Facebook
Twitter
Pinterest
ReddIt
There’s not much that can shake the memories of chasing shots of warm Jack Daniels with warmer PBR (no kidding, that’s how I wooed my spouse) and mixing the Tennessee whiskey with cans of flat diet coke. But hey, those were our choices. Don’t blame Jack. For many, those memories are tied to the Sunset Strip, back when the hairspray was as strong as the guitars were loud. It makes perfect sense, then, that the liquor company has teamed up with the Sunset Strip Music Festival and “legendary rock group” Mötley Crüe for a series of 290 commemorative bottles—complete with a medallion upon which is engraved “Specially Selected for Mötley Crüe.” Rockin’.

The bottles will be offered at the SSMF’s invite-only Mötley Crüe tribute night on August 18, and the recommended $100-per-bottle donation will go to the Skylar Neil foundation—created in honor of Vince Neil’s daughter who died of cancer in 1995. (NOT Rockin’.) The Jack Daniels folks selected a single “special” barrel for the limited-edition series which will be signed by the band and auctioned off at the exclusive, VIP event. In short, you probably won’t get your hands on a bottle. But let’s be honest, if you think back hard enough you can probably taste it anyway.