Home Uncategorized It’s Beginning to Look a Lot Like Soup Season: Where to Taste... 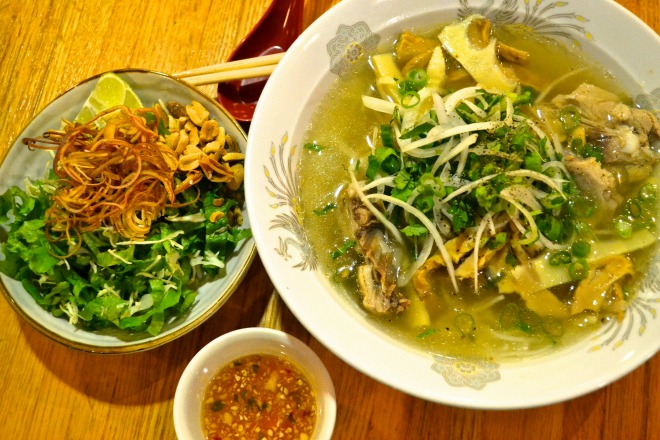 This is the time of year when Angelenos find frost on their windshields in the morning and can spot snow capped mountains off into the distance. It’s cold—at least for us. Although the weather isn’t as cold as it gets in other parts of the U.S., it’s cold enough for us to crave a bowl of hot soup.

While Vietnamese pho bo or pho ga (beef or chicken pho, respectively) may be the perfect food in frigid temperature like this, another Vietnamese noodle soup can be heartier and more soothing. Consider: duck noodle soup with bamboo shoots.

Known as bun vit xao mang in Vietnamese, duck noodle soup with bamboo shoots is not a common selection on many Vietnamese menus in SoCal. However, you can snag a bowl at Quan Hop Restaurant in Little Saigon (Westminster) where the country’s best and most authentic Vietnamese cuisine can be enjoyed.

Quan Hop is the sister restaurant to Quan Hy by the Ton family in Little Saigon. Quan Hop was opened in 2006 to take on a bit of the overflow from the popular Quan Hy, which launched in 2003.

The duck noodle soup with bamboo shoots is a wholesome bowl, and something you’d more commonly find cooked in the home, rather than at a restaurant. It’s a simple, rustic meal that will warm and fill you up with the richness of duck and the smooth heartiness of bamboo shoots.

In a foundation of chicken broth, steamed pieces of duck thigh and leg swim around with chunky slices of fresh bamboo shoots. This is the northern Vietnamese rendition of the soup. Other versions use dried bamboo shoots, which lend a different texture and more concentrated flavor.

This winter when you’re craving a hot bowl of comforting soup, sip on some Vietnamese duck soup—it’s the other chicken soup.