Home Uncategorized Is Judgment Day Upon Us?: L.A. Chefs Share Their Last Meals 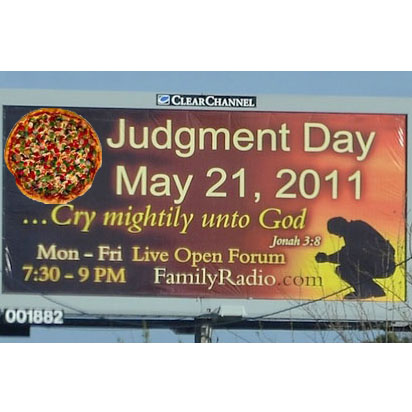 Share
Email
Facebook
Twitter
Pinterest
ReddIt
No doubt, you’ve seen them across the city: massive billboards warning of the impending Rapture on May 21st, 2011—yep, tomorrow.  The man giving the heads up as to our imminent demise is Evangelical radio host Harold Camping and his Family Radio Network. Incidentally, the group previously predicted the Apocalypse would occur in 1994 (but this time they’re absolutely 100% certain). Many may dismiss the prediction as pure hoopla (for good reason), but we here at Los Angeles magazine prefer to hedge our bets. Do you really want the world to end without taking time to indulge in a final meal? Would you splurge on massive amounts of champagne and caviar? Or would you finally opt for the bacon double cheeseburger you’ve been depriving yourself of for beach season? Since you have less than 24 hours to decide, we thought we would enlist some of L.A.’s top chefs to tell us what they would want in their stomachs when Judgment Day goes down—tomorrow…

Bryant Ng – The Spice Table
“I’d love to have my wife’s chicken pho. I know it sounds pretty damn cheesy, but it’s true. At least in the last moments I’ll be reminded of her.  Also, chocolate malted crunch ice cream from Thrifty’s (now RiteAid).”

David Myers – Comme Ça
“A kaiseki experience in Kyoto, then move on to sushi at Saito in Tokyo, then finally wrap up with a great grill-out with friends in Bali.”

Karen Hatfield – Hatfield’s
“I would insist Quinn [Hatfield] remake the dish that made me fall for him. The first time he cooked for me, it was simple roast chicken with artichoke and celery root gratin. And lots of good German beer!”


Roxana Jullapat – Ammo
“Twelve years ago, right after I graduated from cooking school, my good friend and former classmate (and now a celebrated Los Angeles chef) Samir Mohajer invited me to dinner to his parents house to celebrate Persian new year. If I were to have a last meal, I would like to reproduce that delicious dinner of Basmati rice with candied orange zest and pistachios, whole and glossy roasted chickens with prunes and dates, sweet fritters for dessert…I’ve had so many magnificent dinners since but none have left a more memorable impression.”
Mirko Paderno – Oliverio
“Roasted pork belly with polenta!”
Jason Kim – Forage
“My judgement day meal would be soondae!… When I was 5 years old and living in Korea, my grandmother would give mean few coins and would tell me to go the neighborhood market and pickup soondae. I have vivid memories of running to the market with change in hand, buying these blood sausages and eating them with salted shrimp and chili flavored salt with my grandma.”
Josef Centeno – Lazy Ox Canteen
“Foie gras torchon shaved over hearts of romaine with mustard
vinaigrette, roast chicken with harissa, rare prime rib with Robuchon
pomme puree, slow-roasted porchetta, and a lot of bone-dry martinis.”
Ricardo Zarate – Mo-Chica
“For [my] last supper I would cook for my friends and family something called “ceviche de pollo”. It’s actually a warm ceviche made of a chicken stew with onions and a lot of lemon. And [I] would be drinking Marlboro Sauvignon Blanc”.
Claud Beltran – Noir Food and Wine
“A whole plate of nothing but Zankou chiken skin and garlic sauce, a bottle of Cote Roie, and a pile of dulce de leche whoopie pies form Baking Whoopie “