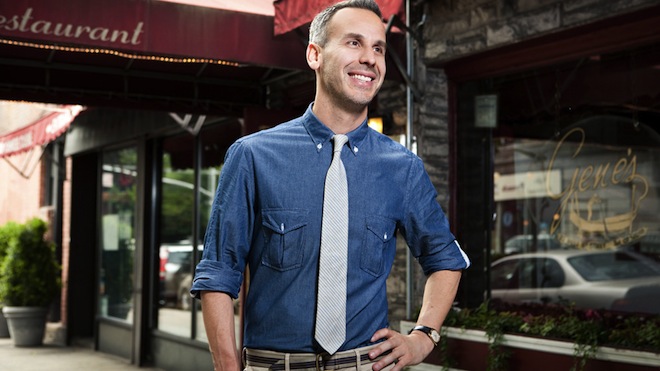 Nearly three years ago, when publishing giant Condé Nast folded Gourmet magazine, the decision to move Bon Appetit‘s editorial offices (which had always been located in Southern California) to New York came down on L.A. like a meat cleaver on a piece of skirt steak. Around the same time, longtime editor in chief Barbara Fairchild stepped down from her post and a new editor in chief was hired.

Adam Rapoport, a former style editor at GQ, promised to bring new energy and a more modern sensibility to the magazine. Looking back now, it’s hard to miss the changes that have come to Bon Appetit in the intervening years. Everything from the graphics to the stories has taken on a more masculine angle. But more than that, there’s been an unnerving focus on fashion. Take the magazine’s new tumblr feed, for instance. It’s not about what the magazine’s writers are eating or cooking; it’s all about what the editors wear to the office.

Rapoport’s first controversial move was to put actress and sometime food-lover Gwyneth Paltrow on the cover of the June 2011 issue. The ensuing debate over whether Paltrow was or wasn’t worthy of gracing a food magazine’s cover reached across the pond. In the editorial—which Rapoport wrote himself—Paltrow’s blue dress received as much attention as the food she cooked. Soon afterwards, Chowhounders called the magazine a “food tabloid.”

I raised my eyebrows, and then put them back down. Perhaps this was a strategic publicity move and nothing else. But when subsequent issues featured similarly skinny fashion fauna like Kelly Wearstler and Gaby Basora, I couldn’t help but wonder: just how much does Adam Rapoport miss the style beat?

The man grills in white jeans wears white jeans in photoshoots for stories on grilling. He tweets about his outfits almost as much as he does about what he’s eating. And now, as of last week, there’s that new Bon Appetit tumblr dedicated—not to food, but to fashion.

I love Bon Appetit, and will always be a subscriber, but I worry now that it’s straying too far off course. As one of the last national food magazines on the market, I pray that it starts focusing firmly on the food world again, and not on fashion fluff.