Home Business She Went from Tech Exec to Farmer, Forager, and Secret Weapon to... 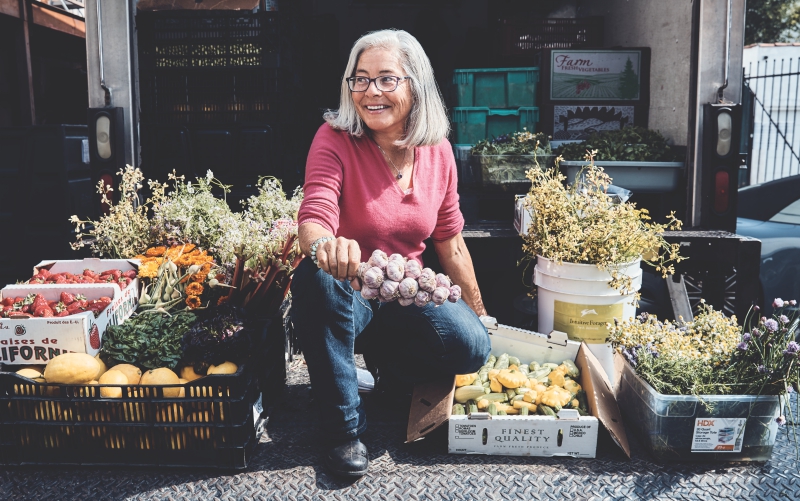 Across Pacific Coast Highway from the bustling Point Dume Plaza shopping center, where BMWs compete for parking spaces, a narrow driveway leads up to the Farm at Malibu, a 16-acre slice of serenity overlooking the coastline below. The only vehicle in its dirt lot is a lime green school bus carrying a load of pink and purple garlic harvested in the mountains of Baja and driven north by a fedora-wearing farmer named Don.

He’s here to strike a deal with the farm’s owner, Kerry Clasby, who’s known as the Intuitive Forager. If you’re among the country’s highest-echelon chefs, Clasby is the person to call when you need fig leafs in January or you’re looking for something as obscure as scallop gonads. “If it exists,” Clasby says, “I’m the one who’s going to find it.” She’s also a good contact, it seems, when you’ve got 4,000 pounds of garlic for sale.

When not tending to the figs, avocados and citrus she raises in Malibu, Clasby and her team scour 35 farmers’ markets a week across California, adding to her network of growers. She sources hard-to-find products like the Iraqi black dates she sells to Nancy Silverton or organic red walnuts from a grove that she ferreted out among the redwoods near Santa Bounty Hunter Cruz.

“It’s like C.S. Lewis,” she says. “You open the door and turn a corner, and there’s an organic watercress operation that you never knew about.”

Clasby is a 58-year-old former tech exec with salon-perfect silver hair and a million-dollar smile. She has dirt under her fingernails and holes in her yellow clogs yet manages to look regal standing atop a compost heap. It’s hardly surprising to learn that she was once cast in an organic Miracle-Gro commercial after being “discovered” selling tomatoes and mushrooms.

How she came to shepherd a farm and fig orchard in Malibu is a winding tale that is just as serendipitous. Back in 1999, Clasby was on a Laguna Beach loading dock, trying to sell a bumper crop of heirloom tomatoes from the back of her SUV. Celebrity chef Michael Mina came by, they struck up a conversation, and after an impromptu tasting he bought her whole lot. Mina introduced Clasby to his pals in Vegas, and soon she was sourcing goods for every big-name chef on the Strip. “Chefs love what I do because it’s what they do,” she says. “They want the best product, and they’re obsessed with doing it right.”

A few years ago, while hunting for early-season fig leaves, Clasby found herself at 62-year-old Vital Zuman Farm. She became a regular, and when the property’s tenant retired, he recommended Clasby to take over in 2016. She now cultivates six acres of organic fruits and veggies, available to the public on Sundays at the Mar Vista Farmers’ Market. Or, if you want to visit her roadside stand, just look for a little hand-painted sign across from Point Dume Plaza pointing the way.

What Is Bread Maven Nancy Silverton Doing in a Subway Ad?